2017 Reading Challenges: Back to the Classics 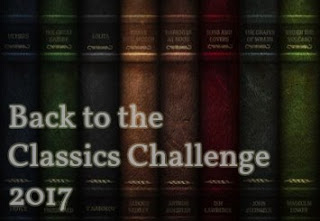 
1.  A 19th Century Classic - any book published between 1800 and 1899.
2.  A 20th Century Classic - any book published between 1900 and 1967. Just like last year, all books MUST have been published at least 50 years ago to qualify. The only exception is books written at least 50 years ago, but published later, such as posthumous publications.
3.  A classic by a woman author.
4.  A classic in translation.  Any book originally written published in a language other than your native language. Feel free to read the book in your language or the original language. (You can also read books in translation for any of the other categories).
5.  A classic published before 1800. Plays and epic poems are acceptable in this category also.
6.  An romance classic. I'm pretty flexible here about the definition of romance. It can have a happy ending or a sad ending, as long as there is a strong romantic element to the plot.

7.  A Gothic or horror classic. For a good definition of what makes a book Gothic, and an excellent list of possible reads, please see this list on Goodreads.

8.  A classic with a number in the title. Examples include A Tale of Two Cities, Three Men in a Boat, Slaughterhouse Five, Fahrenheit 451, etc.
9.  A classic about an animal or which includes the name of an animal in the title.  It an actual animal or a metaphor, or just the name. Examples include To Kill a Mockingbird, Of Mice and Men, The Metamorphosis, White Fang, etc.
10. A classic set in a place you'd like to visit. It can be real or imaginary: The Wizard of Oz, Down and Out in Paris and London, Death on the Nile, etc.
11. An award-winning classic. It could be the Newbery award, the Prix Goncourt, the Pulitzer Prize, the James Tait Award, etc. Any award, just mention in your blog post what award your choice received.

12. A Russian Classic. 2017 will be the 100th anniversary of the Russian Revolution, so read a classic by any Russian author.