Book Review: The Lord is My Shepherd 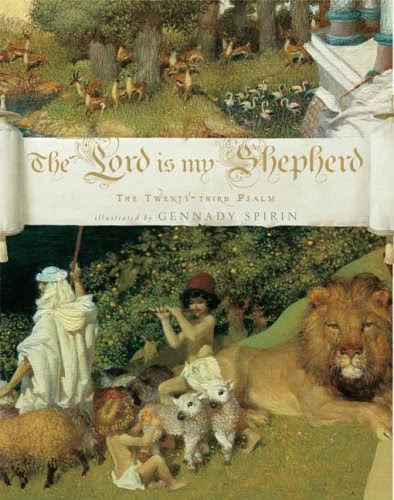 The Lord is My Shepherd: The Twenty-Third Psalm. Illustrated by Gennady Spirin.

The text should be familiar to most Christians. Perhaps even outside the Christian realm is this one known. The 23rd Psalm has such a poetical flow about it that is very evocative. This is probably *horrible* to admit, but when I read these words, it brings to mind the scene in Gone With The Wind (where Scarlett is nursing the soldiers in the army hospital) right before the seige of Atlanta begins. I believe the shot is of a stained glass window. You can hear the sounds of cannons in the background. Anyway, my confession time is over!

The text is the King James Version of the Bible.

So let's say you know the text, what would make you want this book in your collection? The artwork perhaps. Each two page spread has an incredibly detailed and most often exquisite artistic rendering. These spreads will appeal to some more than others. (There is something very old-fashioned and traditional about the art. Not that it isn't beautiful. But I fail to find it breath-takingly beautiful. The art didn't wow me.) Or perhaps this might make an ideal way to aid memorization of the 23rd Psalm. (That I could understand completely. I attended a Christian school that was big on memorization.)

Rereading my review, it might seem I'm a harsh critic. That isn't at all the case. It's not that I disliked this one at all. I think the Scripture speaks for itself. And in many ways the art does as well. You'll either be drawn to it, or you won't. Nothing that I say--one way or the other--will persuade you.

© Becky Laney of Young Readers
Posted by Becky at 2:27 PM No comments:

So here I am

It is my goal in October to post each and every day here on Operation Actually Read Bible. I'd love to make this a daily habit. And I'd love to build a readership. But who knows if and when that will happen.
New since last time...
I've started Mark. Still in the Wycliffe Bible. I've read the first six or seven chapters of this gospel.
I've finished 1 and 2 Timothy for Sunday School. We'll be beginning Titus this upcoming Sunday.
I discovered that R.C. Sproul's Renewing Your Mind show is available for free as podcasts. You can subscribe in iTunes.
I just discovered that today, but I've already listened to three podcasts: The Touch of Worship, The Taste of Worship, and The Sound of Worship, pt. 1. I'm currently listening to The Sounds of Worship pt. 2. This series, I believe, is based on one of Sproul's books that I read last year.
I've been listening to Carman's Hymns CD.
Posted by Becky at 2:20 PM No comments:

I have been reading...

Sometime last winter/spring, I bought the Wycliffe Bible (well the NT really), and I started reading it in Matthew. After putting it down at some point last spring, I picked it up about four days ago and started reading right where I'd left off. So there you go.