What Bible(s) did I read from this month? I finished TWO bibles this month. The Rainbow Study Bible NIV 2011 and the NASB 1971 First Edition. I then began two new projects: the KJV and the New English Bible.
How many books by J.C. Ryle did I read this month? I am still working on his Expository Thoughts on the Gospel of Matthew.
Favorite quote(s) by J.C. Ryle:
Am I keeping up with my Morning and Evening devotional by Charles Spurgeon? Yes.
Favorite quote(s) by Charles Spurgeon:
How many books by R.C. Sproul did I read this month? 1
Surprised by Suffering. R.C. Sproul. 1989. Tyndale. 214 pages. [Source: Bought]


Did I read any Puritans or Reformers this month: I read a book about the Reformers.   Reforming Joy: A Conversation between Paul, the Reformers, and the Church Today. Tim Chester. 2018. Crossway. 112 pages. [Source: Review copy]

Favorite quote(s):
Did I complete at least one book from the TBR Pile challenge? Which one? Yes. Dear and Glorious Physician. Taylor Caldwell. 1958. 560 pages. [Source: Bought]

Which book was my overall favorite?

© Becky Laney of Operation Actually Read Bible
Posted by Becky at 8:00 AM No comments:

McGee's commentary reprints the whole text of Scripture in the King James Version. His commentary doesn't cover every single word of every single verse in every single chapter. But he does cover the whole text in chunks or paragraphs. His approach is not scholarly. It is relaxed, conversational. Every reader is his friend. But just because he considers the readers his friends doesn't mean he sugarcoats the truth. He is all about telling the truth as he sees it. The truth, the whole truth, and nothing but the truth--even if it hurts feelings.

That being said, do I agree with McGee's conclusions 100% of the time? No. We have theological differences. We both love--loved--Scripture. (McGee died in 1988 at age 84.) We both view Scripture as having the highest, ultimate authority in the life of a believer. We share a desire to see God glorified and humanity redeemed. We just differ in a few little details here and there.

I enjoyed his second volume on Genesis more than his first volume.

Book Review: Where Did You Come From Baby Dear? 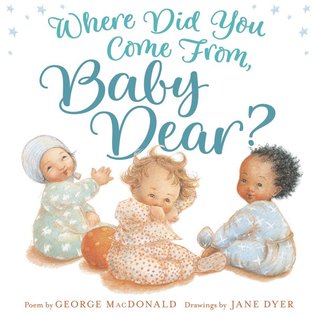 Jane Dyer has newly illustrated and adapted George MacDonald's classic poem "Where Did You Come From, Baby Dear?" You may read the full poem here.

MacDonald was a British fantasy writer and a minister (1824-1905). His poem is "lightly spiritual" according to the publisher, Random House. I would agree with the assessment. God is mentioned a handful of times as are angels. It is not meant to be a theological work by any stretch of the imagination.

The book celebrates babies. It is cute, sweet, adorable, lovely, delightful, charming. I love the illustrations by Jane Dyer.


© Becky Laney of Operation Actually Read Bible
Posted by Becky at 8:21 AM No comments:

This week I'll be sharing quotes from Charles Spurgeon's Morning and Evening and J.C. Ryle's Expository Thoughts on the Gospel of Matthew.

From Expository Thoughts on Matthew, chapters 23 and 24

From Morning and Evening

© Becky Laney of Operation Actually Read Bible
Posted by Becky at 11:52 AM No comments:

McGee is a very casual and conversational, very tell-it-like-it-is, very simple. He introduces the book of the Bible. He then goes through it practically verse by verse, chapter by chapter. The translation reprinted in the commentary, is, I believe, the King James Version. It is reprinted. Unlike some commentaries that provide Scripture references and outlines, this one does give you the Scripture text in the text itself. You don't have to have an open Bible in hand. (Which is very nice!) He likes to try to make connections between then and now, to point out ways that the text is relevant to you and me.

I agree with McGee some of the time, but, definitely not all the time. There were statements that I disagree with passionately in this one.

Included in this commentary is his GUIDELINES on Bible Reading. (I believe these guidelines are included in most of his commentaries?)

McGee and Me Checklist

Thru the Bible with J. Vernon McGee Radio Program


I want to mention seven very simple, yet basic, preliminary steps that will be a guide for the study of the Word of God. 1. Begin with prayer. 2. Read the Bible. 3. Study the Bible. 4. Meditate on the Bible. 5. Read what others have written on the Bible. 6. Obey the Bible. 7. Pass it on to others. You may want to add to these, but I believe these are basic and primary. Someone has put it in a very brief, cogent manner: “The Bible—know it in your head; stow it in your heart; show it in your life; sow it in the world.” That is another way of saying some of the things we are going to present here.

Feel free to copy/paste this. You can replace the _ with an X or a ✔ (copy/paste it) when you finish reading a book.

First sentence: Lucanus was never sure whether he liked or disliked his father. He was only certain he pitied him.

I wanted to love Dear and Glorious Physician. I did. In theory it sounds like it has the potential to be good--really good. It is a fictionalized account of the gospel writer Luke. (Luke wrote Acts as well.) But not all biblical fiction is biblical--this is something I've learned the hard way.

Lucanas, our narrator-hero, is Greek. His father and mother were former slaves. Lucanas became favored and essentially adopted by a Roman nobleman. He was trained as a physician. From an early, early age he was compassionate and empathetic. He never wanted to be a doctor to the wealthy, the elite, the privileged. He always wanted to be a doctor to the poorest of the poor, the socially unacceptable. (Slaves. Lepers. Prisoners.) From a young age his touch was a healing touch. Long before he learned of a Jewish Messiah, long before he learned of Jesus' teachings, his life, his death, his resurrection, long before he started calling on God and placing his trust in him, he was healing people. He continues to heal people after he hears 'the gospel' as well. In these healings Caldwell does not show Lucanas healing in the name of the Lord Jesus Christ. He doesn't bow his head and pray silently. He just heals. He even raises a girl from the dead. In one instance, Lucanas "feels virtue" leaving his body as he heals. This is just bizarre and all kinds of wrong.

The last third of the book shows Lucanas traveling around interviewing eyewitnesses--men and women who has seen the Lord Jesus Christ, heard him, followed him, knew him. One of the longer interviews is with Mary and other family members. There we learn that Mary was eternally innocent and that she was not conceived in sin and had never sinned. Again. All kinds of wrong.

Lucanas has an unfavorable opinion of James and John and some of the other disciples. He mentions how he thinks that they will get Jesus' teachings wrong in the name of evangelism. How they will let their own agendas shift the focus from what Jesus actually taught. Again. All kinds of wrong.

The first two-thirds of the novel weren't WRONG so much as slightly tedious and boring. The last third of the novel was wrong more often than right. Some things subtly off from Scripture, some things out and out OFF. (For example, when she had Lucanas meet John he was YOUNG and yet had already received the visions of Revelation. Saul was still Saul--not Paul. Saul hadn't met the apostles in Jerusalem yet. Saul hadn't begun his ministry yet. But John had received the visions of the last days?! Going back to Saul for a minute....Saul hadn't begun his ministry yet but had already received his calling to minister to the gentiles only????)

I honestly don't know if Taylor Caldwell even read Luke and Acts before she wrote this book. Perhaps this imaginative retelling takes into consideration some bad theological works of Caldwell's time?

© Becky Laney of Operation Actually Read Bible
Posted by Becky at 8:31 AM No comments:

This week I'll be sharing quotes from Charles Spurgeon's Morning and Evening and J.C. Ryle's Expository Thoughts on the Gospel of Matthew.

From J.C. Ryle's Expository Thoughts on Matthew, chapters 21 and 22

From Charles Spurgeon's Morning and Evening: