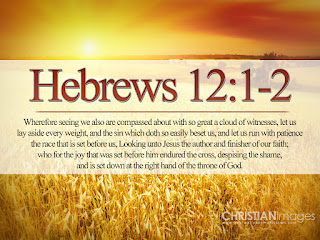 If my math is to be trusted this will be my SEVENTH year I'll be hosting the Cloud of Witnesses Reading Challenge. I hope you'll join me! I welcome back former participants! And I hope to see some new participants as well this year! I'd love to show you that reading "from the Cloud" isn't intimidating and scary. The dates for the challenge are January 1, 2019 to December 31, 2019.

The title of this reading challenge comes from Hebrews 12:1-2, which reads "Wherefore seeing we also are compassed about with so great a cloud of witnesses, let us lay aside every weight, and the sin which doth so easily beset us, and let us run with patience the race that is set before us, Looking unto Jesus the author and finisher of our faith; who for the joy that was set before him endured the cross, despising the shame, and is set down at the right hand of the throne of God." (KJV) If the KJV isn't quite for you,


Therefore, since we are surrounded by so great a cloud of witnesses, let us also lay aside every weight, and sin which clings so closely, and let us run with endurance the race that is set before us, looking to Jesus, the founder and perfecter of our faith, who for the joy that was set before him endured the cross, despising the shame, and is seated at the right hand of the throne of God. (ESV)

For an author to qualify for this reading challenge, they must be among "the cloud of witnesses".... in other words, they must be dead. (They must also be Christian.)
The following list is NOT comprehensive by any means. It is just a small sampling of authors that count towards the challenge.


So what "counts" for this challenge? Well, the goal is to get you acquainted with different authors. So any reading material will count: no matter the length. It can be an article of a few pages; an individual sermon or a collection of sermons; it can be a book of quotes by that person; it can be a biography or autobiography about the person; you might find full-length books available online, or individual sermons online. And of course it doesn't matter if it's a book-book, e-book, or audiobook.
So how do I find books? Some authors will still be in print. Others won't be. Plenty of qualifying books can be found at Amazon for Kindle or Barnes & Noble for Nooks. Plenty can be read online or downloaded as pdfs.
A great place to begin might be Free Grace Broadcaster. They've got subject-themed newsletters with articles by various authors. Topics include "The Work of Christ," "Worship," "Heaven," "The Resurrection." I also recommend Christian Classics Ethereal Library.
So how many books are required?
If you're completely new to christian nonfiction (christian living, theology, bible commentaries, bible studies, etc.) then I'd like to challenge you to read ONE or TWO books. If your first attempt is too tough, or proving not-for-you, try again. Don't assume that just because one author isn't working for you, that no author will.
If christian nonfiction is something you're comfortable reading, I'd like to challenge you to read four to six books for this challenge.
Sign up for the challenge by leaving a comment on the blog.