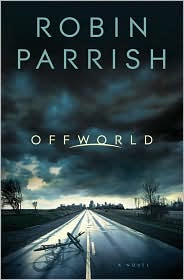 Parrish, Robin. 2009. Offworld. Bethany House. 361 pages.
Offworld by Robin Parrish has a premise that had me curious. I first read about this one early in the year--January or February--and I knew right away I wanted to read this one. What's the premise? A team of four astronauts return to Earth--after a mission to Mars--to discover that humanity has vanished. Completely vanished. Sounds fun, right? Well, if you like dystopian fiction it does. This mystery starts in space actually. The astronauts lose communication with Earth several months into their return trip. The closer they get the more they realize is missing. There is nothing coming from Earth.
Christopher Burke. Trisha Merriday. Owen Beechum. Terry Kessler. Are these four astronauts all that remain of the human race? Not quite, as we come to find out, the first person they stumble across is a young woman named Mae. She's an odd one. Why should she be--seemingly at least--the only human that survived whatever it was that happened? These four astronauts survived because they were off planet. But why did she? Are there others likes her? Tis a mystery no doubt. But not the main mystery--at least not to our four heroes--they're trying to figure out what this bright light is that is coming from Houston. Is the bright light connected with this disappearance? Will traveling cross country to Houston answer all the unanswerable questions they have? They certainly hope so!
It's a weird road trip. And a dangerous one as well. Are all these close calls a coincidence or is someone trying to send them a message?
S
P
O
I
L
E
R
While the back cover says that this is "not a trick." I have to disagree. At least slightly disagree. I think it is a trick--a dangerous trick, a risky trick--but a trick nonetheless. Someone has plotted this disappearance with the so-called intentions of bringing back the human race after their master plan has been achieved. If that's not a trick--making someone disappear and reappear--I don't know what is.
Becky Laney of Operation Actually Read Bible
Posted by Becky at 2:31 PM