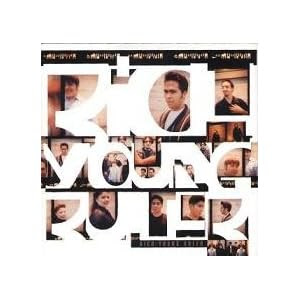 Well, this time of year is dangerous for me. I seem within a week or two have a dozen or so ideas of things I want to do in the summer, or need to do in the summer. At the time, of course, I know that I'll never be able to do every little thing I want. But it doesn't stop me from daydreaming and planning. One idea I had, and if you'd like to give feedback I'd appreciate it, is to spend some time focusing on music albums. At first I thought I'd have a target number and these would be my favorite-and-best, I knew I wouldn't try to put them in any order. But now I'm not sure that I have to have an exact number in mind, that I don't have to have it all planned. I do know that the albums won't all be new or even mostly new. I thought I would talk about what albums meant something to me, which albums have made an impression on me.

For example, today I thought I'd write about the album, Rich Young Ruler. Have you ever heard of the group Rich Young Ruler? I'm not sure many people have which is just one reason why I'm highlighting the album today. It was released in 2000, and as far as I know, it was the bands only release. Though the CD is no longer available new (used copies start at a penny), the album is available as an mp3 download.


The songs work together well, blend together well, making for a very satisfying listening experience. It is one of those rare cases where I don't have a particular favorite song, because each song is part of a whole, almost. It's just great when an album has one or two songs that you just love, love, love absolutely. But, for me, those songs are often found on albums that aren't so satisfying as a whole. Yes, there are good songs, but there are songs you'd just as well not listen to, if you know what I mean. This album is the reverse. Each song does it share to make the whole album in its entirety a joy to listen to.

Rich Young Ruler has a very mellow, very retro, very oldies feel to it. Think of the goodness that is Herman's Hermits, The Lovin' Spoonful, and to some extent The Turtles. One Amazon reviewer compared it to the music in That Thing You Do, and I think that is true too. It just has a very sixties feel to it. Which I just LOVE, LOVE, LOVE. I mean maybe it's not for everybody. Christian comparisons may be harder to come by, but, The Elms "All The While Having Fun," comes close. Unfortunately, that's the only Elms' song I ever got into. The only other comparison that comes to mind is PFR. Though I don't think you'd have to like Pray For Rain to enjoy this one. (PFR is hit and miss with me; their are individual songs that I've enjoyed, even really enjoyed, but none that I've LOVED.)

Rich Young Ruler - Take It Anywhere from 2nafish on GodTube.