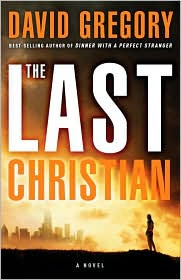 The Last Christian. David Gregory. 2010. Waterbrook Press. 416 pages
I see your neurons firing, Ray.
The Last Christian has an interesting premise. A very thought-provoking premise. It's set in 2088, in the United States, for the most part. In this day and age, Christianity is essentially dead.
Abby Caldwell, our heroine, is the daughter of a missionary couple; she has only known one way of life, the Christian way of life. She's from Papua New Guinea--from the jungle where she was born and raised. But when a mysterious illness kills everyone in her village, well, she sets off on an adventure of her own. She's on her way to America to try to fulfill her grandfather's vision.
Abby received a message--though the message came sixteen years late--from her grandparents. They told her of a dream, a vision. Of how she may be America's greatest hope. Of how she may be the one to bring Christianity back to a country, a nation.
But fulfilling that dream may cost her her life. Because the country is not only unreceptive to the gospel, but openly hostile. She may face jail time for her "hate speech" if she tries to share the gospel with others.
Of course, that is only the beginning of the story David Gregory has written. The Last Christian reads more like an eery Twilight-Zone episode. Artificial intelligence. Silicon Brains. The obsession to combine technology and biology--to take humanity to a whole other level, to be transhuman. The quest of driven men to live forever and ever.
Science. Politics. Religion. Ambition. Greed. Murder. The Last Christian is a compelling read. It is a bit more premise-driven, action-driven, than character-driven, but that isn't necessarily a bad thing.
What I liked best about The Last Christian was it made me think. I'm not sure I liked every little thing about the book. The book makes some strong statements here and there about our church culture, our faith. But. If nothing else it makes you think about faith. What would happen--what could happen--if faith fails. (I think truth is infinitely more important than entertainment value. That the church shouldn't be so open to compromising the truth--changing the gospel--in order to bring more people in the doors.) I liked that Abby didn't have all the answers. That she wasn't perfect. That she was human. That she had her own faith challenges to work out.
Reading Group Guide.
© Becky Laney of Operation Actually Read Bible
Posted by Becky at 12:55 PM