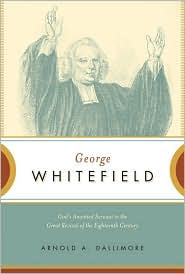 George Whitefield: God's Anointed Servant in the Great Revival of the Eighteenth Century. Arnold A. Dallimore. 2010. Crossway Publishers. 224 pages.
George Whitefield was born in 1714 in The Bell Inn at Gloucester.
I really enjoyed reading Arnold A Dallimore's biography of George Whitefield, one of the founding fathers of Methodism. He was an evangelist--an open air evangelist--in England, Scotland, America, and Ireland. He spent decades of his life traveling and preaching whenever--wherever--he could. With amazing results. (Numbers that might shock you a bit.) Of course, such results are not because Whitefield was the most amazing preacher ever. No, they were because our God is an Amazing God. Whitefield is one of the 'stars' of the revival. He is one of the men God chose to do the work. Readers will learn about George Whitefield, but they'll also learn about Whitefield's contemporaries on both sides of the Atlantic: John and Charles Wesley, David Brainerd, Jonathan Edwards, Benjamin Franklin, etc.
The book is about religion--the politics of religion at times--but it is also about revival. God moving people's hearts and minds. It was amazing to read about the men, women--all classes of men and women--who were called during this time.
Whitefield was a believer of the Doctrines of Grace (aka Calvinism). John Wesley, who wanted to be THE STAR of the movement was not a Calvinist. To put it mildly. Personality conflicts kept these two from working closely together. Though Whitefield, ever the gentleman, kept it very civil. I loved how Whitefield was able to maintain a close friendship with Charles through the years. I learned a few things about Charles Wesley too. It seems I've been unfairly pairing him with his brother and dismissing him.
I would definitely recommend this biography to anyone wanting to learn more about this revival.
© Becky Laney of Operation Actually Read Bible
Posted by Becky at 11:27 AM

I have 2 Moody Classics books to read.
1. Born Crucified by L E Maxwell
2. The Incomparable Christ by J Oswald Sanders
And I have a book from The Essential Edwards Collection.
True Christianity

I know very little about George Whitefield, thank you for sharing this review!

Hi Becky,
Glad you enjoyed the book by Rev. Dallimore. I did too! Did you read volumne two as well? I actually cried when I finally got to the part where he died. I would love to go visit his grave. The books changed my life and heart. God bless you sister. I wrote a review as well on them and if you like can send it too you.
Denise

Wow, I didn't know this one was an abbreviated biography! I would have loved to read more! I hope I can find a copy of the book in two volumes.