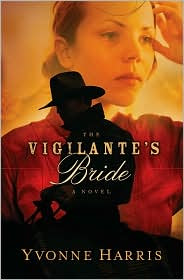 The Vigilante's Bride. Yvonne Harris. 2010. Bethany House. 304 pages.
"Marry him? I most certainly will not. Why, I've never laid eyes on the man!"
Luke Sullivan didn't exactly know what the consequences would be when he decided to rob the stagecoach. He's not exactly a criminal. Just a hero with a momentary weakness--he'd just learned some surprising news about his past, his father, something that attributes blame to the rancher, Bartholomew Axel. Sullivan feels that Axel owes him a bit of money, and, that is his justification.
But what Sullivan didn't know was that the stagecoach was carrying a beautiful young woman to her would-be-husband. She's been purchased by a rancher. Three guesses as to who...yes, Sullivan's enemy, Bartholomew Axel. Sullivan can't in good conscience leave this woman to her fate. She has to be made to see the truth. That Axel is old, ugly, cruel, mean, and a bully. He's not fit to be any woman's husband. Since Emily McCarthy has never met him, and isn't exactly thrilled with the arrangement to begin with, it's not that big a struggle. Not that she's happy to be 'kidnapped.' But she doesn't consider it a crime for long. Especially after meeting Axel a few days later! No, Emily soon thinks that Luke may be the hero of her dreams.
Will Emily find her place in Montana? Will Luke Sullivan find a wife?
I liked this one. It is historical romance--Montana 1880s--with plenty of adventure and drama. I don't think it's the best Christian romance I've read this year. But I've certainly read worse.
© Becky Laney of Operation Actually Read Bible
Posted by Becky at 8:21 PM