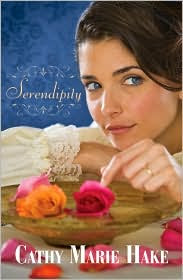 
"Hoo-oo-ie, she's het up!"
Margaret Rose shook a spatula at the men in her kitchen.
"If you plan to eat supper, you'll not be egging him on."
All three bearded jaws dropped.
"I mean it." Never once had she made that threat. In her five years of cooking and caring for a baker's dozen ragtag of old men, Maggie managed to tolerate plenty. Love made it easy to dote on them and overlook blunders. Most often, her "uncles" showered her with affection, appreciation, and endless amusement. Today, however, was different.

Why is Margaret Rose so bothered? Well, the subject of marriage has come up. One of her "uncles" wants her to know that when her "groom" shows up, it's okay for her to leave them behind. To make a new life for herself, to have a home of her own. Fact is, she's the only girl, the only woman, in her (small) community of Carver's Holler. And it's her "job" to take care of everyone. She doesn't believe that any potential "groom" will appear at her door, that they'll come a handsome stranger ready to propose marriage. But chapter two holds a few surprises.

A man, Todd Valmer, is on his way back home to his ranch in Gooding, Texas, with his mother when she gets sick. Margaret Rose is his mother's best chance--as unlikely as that seems--she is able to see that the woman has had a stroke. And she agrees to nurse her until the next train goes through. During that week, Todd sees just how amazing Margaret Rose is. And she has a chance to see just how swoon-worthy he is. But can he convince her that he's worth marrying in such a short amount of time? Will the potential of love, of happily ever after, be enough to convince Margaret Rose to leave her home, her family, her friends, to take a chance on a struggling rancher?

I liked this one. I liked this couple. I liked the struggles these two have with one another after their married. Among other things sharing a one-room house with the mother--the partially paralyzed, understandably bitter mother. She may be thankful (in her own way) for the temporary nursing of a stranger. But. She does not think that Margaret Rose is good enough for her son. She is angry, bitter, and scared. And if Margaret Rose can keep her temper when she's provoked time and time again, it might just be a miracle. But while caring for his mother--in such a small home--may be one big issue, it's not the only issue. The truth is Todd doesn't know Margaret that well. And she doesn't know him. And this getting-to-know-you business can be a little tricky. There are so many opportunities to be misunderstood. I liked the commitment these two made to one another. I liked how this romance focused on the marriage itself.

The novel is set in Arkansas and Texas in 1893. It's narrated by Todd, Margaret, and Helga (the mother).