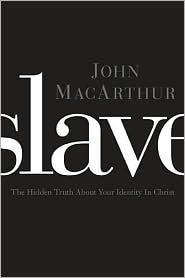 The young man said nothing else as he stood before the Roman governor, his life hanging in the balance. His accusers pressed him again, hoping to trip him up or force him to recant. But once more he answered with the same short phrase. "I am a Christian."

It was the middle of the second century, during the reign of emperor Marcus Aurelius. Christianity was illegal, and believers throughout the Roman Empire faced the threat of imprisonment, torture, or death.

I loved this one. I just LOVED it. I found it insightful and fascinating. I found it reliant on Scripture--as it should be--and I found it relevant. The premise of this one is simple but profound. MacArthur argues that the word usually translated servant in the New Testament--in most English translations--should be translated slave. (According to MacArthur, only one translation gets the word consistently right--the Holman Christian Standard Bible.) For that is what the Greek word truly means. Slave. A word naturally heavy in connotations. The imagery used throughout the New Testament supports this argument. To be a Christian is to be a slave of Christ. Christ redeems us, saves us from our slavery to sin. But we then become His. We are His slaves. We've traded one master for another. And that changes everything. In this life and the next.

MacArthur explores what slavery meant in the Old Testament and the New Testament. He discusses the Old Testament exodus. How God--through Moses and Aaron--delivered his people from slavery in Egypt. Highlighting the fact that the Hebrews then were slaves to God. They were to serve and obey Him and Him alone. They were saved from slavery so they could serve Him with all their hearts, their souls, their minds. They were saved to worship and obey and live holy lives.

He explores what slavery meant in different ancient cultures--particularly in Greco-Roman society. He spends several chapters highlighting what it meant to be a Roman slave. And how it was this image of slavery that Christ had in mind in the New Testament.

It discusses how Christ is Lord and Savior. How you must accept Jesus as Lord if you are to accept Him at all. He discusses how we, as believers, are both slaves and adopted sons and daughters. And that this dual imagery was NOT unusual for the times. Several chapters focus on adoption.

It also examines the doctrines of grace. (Particularly on the "T" of Total Depravity.) I would definitely recommend this one!


We don't hear about that concept much in churches today. In contemporary Christianity the language is anything but slave terminology. It is about success, health, wealth, prosperity, and the pursuit of happiness. We often hear that God loves people unconditionally and wants them to be all they want to be. He wants to fulfill every desire, hope, and dream. Personal ambition, personal fulfillment, personal gratification--these have all become a part of the language of evangelical Christianity--and part of what it means to have a "personal relationship with Jesus Christ." Instead of teaching the New Testament gospel--where sinners are called to submit to Christ--the contemporary message is exactly the opposite: Jesus is here to fulfill all your wishes. Likening him to a personal assistant or a personal trainer, many churchgoers speak of a personal Savior who is eager to do their bidding and help them in their quest for self-satisfaction or individual accomplishment.

The New Testament understanding of the believer's relationship to Christ could not be more opposite. He is the Master and Owner. We are His possession. He is the King, the Lord, and the Son of God. We are His subjects and His subordinates. In a word, we are His slaves. (14-15)

The Bible's emphasis on slavery to God is missing from the pages of most English translations. But that which is hidden in our modern versions was a central truth for the apostles and the generations of believers who came after them. (19)

True Christianity is not about adding Jesus to my life. Instead, it is about devoting myself completely to Him--submitting wholly to His will and seeking to please Him above all else. It demands dying to self and following the Master, no matter the cost. In other words, to be a Christian is to be Christ's slave. (22)

Submission to the lordship of Christ--a heart attitude that works itself out in obedience to Him--is the defining mark of those who are genuinely converted. (46)

As slaves, believers have no intrinsic glory in themselves. But as members of the Lord's household, we are distinguished simply by our connection to Him. To be His doulos is an incomparable honor. (97)

Though the doctrine of total depravity is often the most attacked and minimized of the doctrines of grace, it is the most distinctly Christian doctrine because it is foundational to a right understanding of the gospel (in which God initiates everything and receives all the glory). The neglect of this doctrine within American evangelicalism has resulted in all kinds of errors, including both the watered-down gospel and the seeker-driven pragmatism of the church growth movement. But the Scripture is clear: unless the Spirit of God gives spiritual life, all sinners are completely unable to change their fallen nature or to rescue themselves from sin and divine judgment. They can neither initiate nor accomplish any aspect of that redemption. Even the supposed "good things" that unbelievers do are like filthy rags before a Holy God (Isa. 64:6). Contrast that with every other religious system, in which people are told that through their won efforts they can achieve some level of righteousness, thereby contributing to their salvation. Nothing could be further from the truth. (121-2)