Book Review: Love On the Line 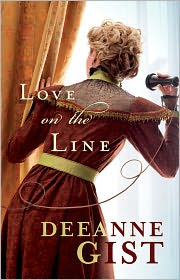 "Everybody off the train."

Love on the Line had me hooked from the start. Texas Ranger, Lucius Landrum, is trying his best to catch a gang of train robbers, a gang led by Frank Comer. His quest leads him on an undercover job. He'll be coming to the small Texas town as Luke Palmer, a troubleman for the phone company. He'll be putting up new lines for the company, repairing lines, trying to get new customers, etc. The town has a phone operator, Georgie Gail, who's VERY independent and a bit unsure about Luke--at least in the beginning.

Luke is trying to catch the bad guys, but he's undercover, so he has to go about it in a certain way. He has to become very friendly with all sorts of different people in the town. Including Miss Gail.

Miss Gail is trying to fight injustice in her own way. The milliner in town infuriates her by his use--his over-use--of bird parts on his hats and accessories. She thinks ANY use of a dead bird is over use. And she's appalled that fashion is so out of control that it is threatening the bird populations. She LOVES birds and wants to see a change. So she's out to organize the women and children in the community.

I enjoyed both characters very much. Loved how the story came together.

The novel is set at the turn of the century.