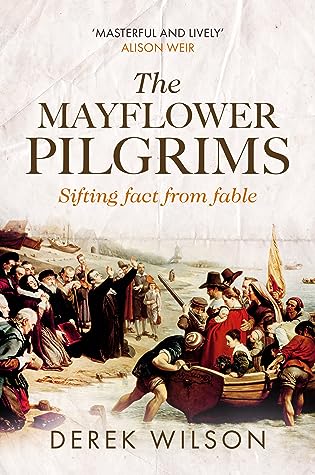 First sentence: Is there such a thing as a Christian country? If so, what would it look like?

I'll be honest I was shocked when I saw that this one was 256 pages. Why? It felt like it was twice that long! Perhaps because the chapters tended to be on the longer side. (If you need to stop mid-chapter to use the bathroom--there's a clue that the chapter is too long.)

This one is all about putting the Mayflower Pilgrims into context, a specific time and place. The story of the Mayflower Pilgrims does not begin at the dawn of the seventeenth century--far from it. At least the way Derek Wilson tells it. He grounds HIS story into the English Reformation--the split from Roman Catholicism. This alone places us a hundred years back. But even that isn't quite far enough, deep enough. For Martin Luther was not the first nor the only to become disgruntled with the status quo and begin asking questions. Before Luther there was Wycliffe and his Lollards--just to name one. No, this story tells the history of religious (and to some extent religious and political dissent) in England (it only touches on Europe in bits and pieces here and there.)

Primarily it focuses on the years 1520 to 1620. (As I mentioned above, it goes a bit further back here and there as context demands.) It is important for readers to understand from page one that this story ends BEFORE a single pilgrim steps aboard the Mayflower. If you go into the book thinking that it will end with the Pilgrims arriving in America, or dare I say the Pilgrims celebrating the first year or two of survival--celebrating with a feast. You'll be mighty disappointed.

From the introduction, "If we really want to discover, as best we can, who the 1620 pioneers were, we need to probe their past, their heritage and their response to that heritage. And we also need some understanding of their context in the world they grew up in, the convictions they embraced, the assumptions they rejected and the changes with which they attempted–not always successfully–to cope. That is why the following narrative does not begin with the 180-ton Mayflower, after a series of false starts, clearing Plymouth harbour. Rather, it ends there. The huddle of religious separatists on the ship’s deck, watching their past disappear over the eastern horizon, believed they knew what a Christian commonwealth would be like and that, far from the satanic influences of the Old World, they could, under God, create it. We know that they were wrong. The communities they planted replicated the vices and the virtues of the ones they had left. The seeds of corruption lay within themselves. The perfect human society is a chimera. But we would do well to guard against cynical superiority."

It explores essentially one question WHY. Why would anyone--man, woman, boy, or girl--set off into the unknown, risking their life??? The voyage across would be dangerous. But after that voyage, then what?!?! Talk about true unknowns and great uncertainty. There is no simple single answer to the WHY question. The answers would be varied and much more complex than we can imagine.

There were a few chapters that I just loved, loved, loved. I found them insightful and interesting. Other chapters I found overwhelming--it seemed the narrative was flying way over my head...and as a result, I found the reading dull. But not every chapter was like that. There were some truly great moments. And I think readers may have to work at staying engaged with the text.

One of my favorite chapters was on the first Bible translations in English. It was fascinating.

© Becky Laney of Operation Actually Read Bible
Posted by Becky at 11:30 AM