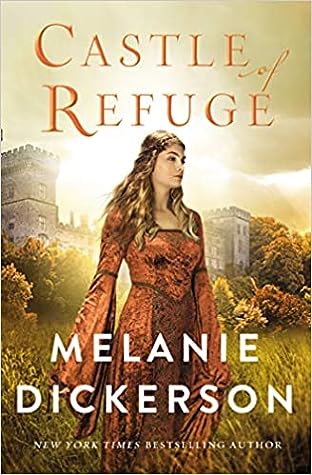 Castle of Refuge (The Dericott Tales #2) Melanie Dickerson. 2021. [June] 336 pages. [Source: Review copy]
First sentence: Audrey hid behind a tree and watched a knight and his squire riding down the lane.
Melanie Dickerson's newest historical romance is a 'retelling' of The Ugly Duckling. Audrey, our heroine, has believed herself to be ugly--because of her sister's cruel words--most of her life. Even more so after her sister (totally on purpose) "accidentally" pushes her face first into a fire. (I'm assuming fire place). Fortunately, it was just her ear/neck that was burned/scarred. So she can 'hide' her damaged face relatively easily--especially if she remains pulled back--out of sight--from society. If up to Audrey, perhaps, she'd never have left her home. But Maris, her cruel older sister, is returning from the convent, and Audrey, well, she's afraid for her life, afraid that her father cannot--will not--protect her.
So Audrey runs away...she finds refuge...in...you guessed it... a castle. But not just any castle, the castle of Lord (Edwin) Dericott. (The two had met oh-so-briefly in the prologue.) Readers first met Edwin in Court of Swans.
Will she finally be safe at last?
Looking just on the surface, you would think this book HAD to be a perfect match for me. Set in England in the Middle Ages (prologue 1378, rest of the novel 1382). A retelling of a fairy tale. Not just any fairy tale but The Ugly Duckling. A romance. How could it ever go wrong?
But. I didn't like it. I really didn't like it. I'll do my best to explain why. But I'm going to throw out a spoiler warning so I can talk freely.
S
P
O
I
L
E
R
W
A
R
N
I
N
G
You've been warned now. I can relax my guard a bit with details.
I think the retelling is not set in the *right* time period. Dickerson's details on what life was like in the middle ages seems incredibly iffy at best. If it was say set anytime after 1611--or even after 1500--I would probably not worry about specifics. Two things stand out to me. One, Audrey (like Delia in book one) is a daughter of a nobleman. She can read. She can write. She knows two to three foreign languages. (French, German, and presumably Latin?). Her education is not seen as out of the ordinary or uncommon. She starts a SCHOOL for girls--all backgrounds and classes including peasants. She stresses the importance of knowing how to read and write. All well and good. But I *don't* think education--public education--was that common, widespread, in particular when it comes to lower classes, in particular when it comes to girls and young women. I think education while not unheard of for some classes--the upper classes, the nobility, etc.--I don't think it was all that common for the rest of folks. Two, owning Scripture is taken for granted. Lord Dericott even has MULTIPLE COPIES of the Bible. IN 1382. Before the printing press. At a time when each copy would have been handwritten or copied out by a scribe. At a time when personal ownership of Scriptures would have been extremely expensive and probably not all that common. Perhaps the nobility did have enough money to have a copy of Scripture. Perhaps like Lord Dericott, they would have had a LARGE library with plenty of books--hundreds, thousands, etc. Then there's the fact that the Bible is in English. The first complete Bible--Old Testament and New Testament--had not been completed in English in 1382. From everything I've read--that's what I conclude. Psalms would have been translated into English earlier. Probably some of the gospels maybe even all the gospels. But the whole Bible had not yet been translated into English...another decade yes. But Dickerson is also not considering that AT THE TIME the English translations--by the Lollards--was seen as dangerous, illegal, frowned upon. Audrey wants to TEACH her students (all girls, all classes) to read using the Gospel of Luke. She wants Edwin to HIRE SCRIBES to copy out a copy for her students. You know, as you do. No biggie. Piece of cake, right. It couldn't possibly cost a lot of money or take a lot of time.
But let's say I can forgive and forget all that. I would still find the lack of inner motivations and flat characterizations a bit annoying. I know it is asking a lot of any writer/creator to flesh out the villain and make them have motivations that make sense. Readers are given a simplistic--too simplistic--explanation for THE VILLAINY VILLAIN. She's very one-note. Maris, the villain, is SUPER EVIL AND DEMENTED because she was physically abused as a toddler (think before the age of 3) by a nurse maid. Decades worth of being with her family after the nursemaid was dismissed hasn't erased her trauma. She's been allowed to verbally, mentally, psychologically, physically abuse anyone in all those years just because. Because her father feels guilty and ashamed he didn't know it was happening. Because her sister pities her. She has a whole household living in FEAR for at least two decades. Everyone says, well, it must be okay because she was abused and there you have it. That's why it's okay for her to act like this. Nothing I can do to make this situation better. Not gonna try. Not gonna intervene. Not going to parent.
One of my pet peeves in romance is KIDNAPPING. I usually find melodrama highly annoying and problematic. Audrey doesn't get kidnapped once or twice or even three times. She gets kidnapped by her evil sister and her GIANT COMPANION with the regularity that some people blow their noses. Okay, I exaggerate. Still. It happens way too frequently in this novel.
The characterizations are weak, in my opinion, and the plot ridiculous.
© Becky Laney of Operation Actually Read Bible
Posted by Becky at 8:16 AM