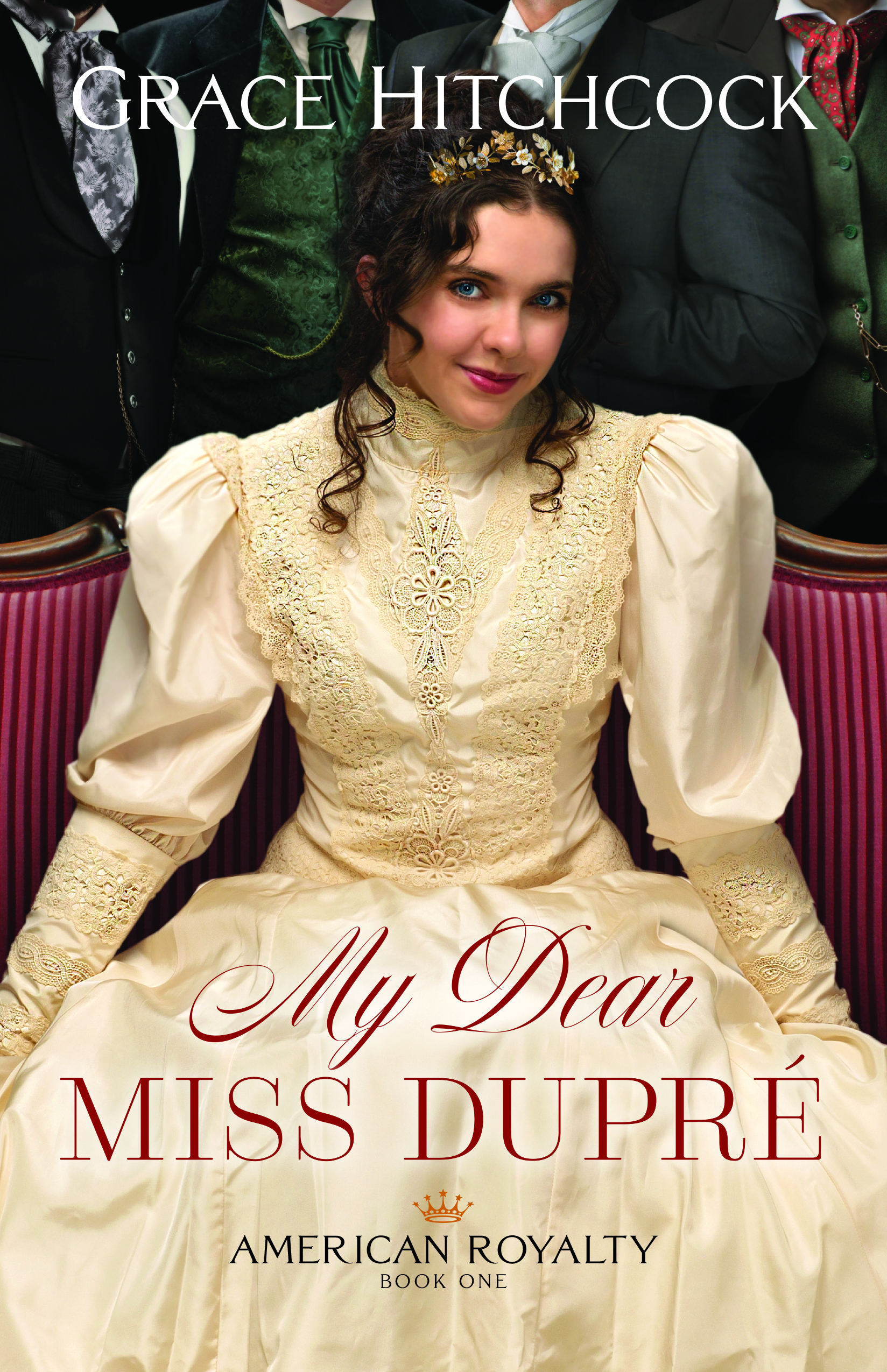 My Dear Miss Dupré. Grace Hitchcock. 2021. [March] 364 pages. [Source: Review copy]
First sentence: Willow Dupré twirled on the ice, spreading her arms and guiding her body around the other skaters on the frozen lake of Central Park.
My Dear Miss Dupré has a love it or hate it premise. Willow Dupré, our heroine, finds herself the center of attention due to her parents' unusual arrangement for finding her a husband. They have arranged for THIRTY ELIGIBLE bachelors (from New York) to all court their lovely daughter at once. She'll be handing out LAUREL CROWNS and asking the bachelors if they accept the crowns ever so often. There will be individual dates and group dates. Instead of a bachelor mansion, the men will be staying with the family in their mansion. All the men under the same roof with her. At one point, halfway through the competition, they even add a travel/vacation plot.
What I didn't point out just yet is that this book is set in 1882 in New York City.
No doubt about it, My Dear Miss Dupré is a premise-driven novel. It checks off ALL the things you'd expect from any and every season of the Bachelor or Bachelorette. Well, almost. Considering that this is Christian fiction and HISTORICAL fiction, we're spared a fantasy suite depiction.
It is an odd little book to be sure. It is clearly derivative of The Bachelorette. The twist is that it's set in the past. But it doesn't really vary off from that pattern, that predictability of The Bachelorette. The odd-ness comes in the balancing of modern-day Bachelorette vibes and the values and morals of the nineteenth century. It's a tricky balance. For example, should Willow be giving away kisses to multiple suitors. She says yes. Her mother (and best friend) say NO, NO, NO. And for being set during this time period, there sure is a lot of freedom and independence when it comes to chaperones/chaperoning.
But what really makes it odd is that this forcing of the historical lens on the process (Bachelor Nation) makes for a thought-provoking read. There's this struggle between pride and shame, arrogance and humility. For example, the bachelors, the male contestants if you will, there's this internal struggle of IS THIS THE MOST HUMILIATING THING IN THE WORLD???? Why am I allowing myself to be put in this situation where I am groveling for attention, acceptance, etc??? Why am I letting my ego take so many punches??? Why do I care so much for this one woman??? How did I get dragged into this mess??? There's pride each time a laurel is offered--to a certain degree. But it's a condescending type of pride even then.
Willow struggles as well. She didn't ask for this. But she didn't refuse either. She goes along--no matter how silly or ridiculous. And most of the time it's a big ego-boost. She loves the flattery, the attention, the me-ness of it all even while she's questioning the motives of some of the contestants. She is really having the time of her life. It isn't all easy, however.
One way to read the novel is as a parody of The Bachelorette.
One example of the melodrama:

Willow’s jaw dropped. Whatever is he upset about now? “Mr. Seaborne. You forget yourself.” Cullen tilted his head, his brows lowering to a point as he set aside his cup and reached for Willow’s. “And why am I a cad?” Mr. Seaborne gestured to where they sat, the vein in his head becoming more prevalent. “You robbed me of my special moment with Miss Dupré.” Willow’s stomach dropped, the lingering taste of chocolate turning bitter. The Fae? Oh, Cullen. “Oscar, you planned this?” She lifted the nosegay and gestured to the set behind her. “Of course I did. I gathered those blooms myself and had the servants prepare the rest.” Cullen groaned. “My apologies, chap. I did not know.” His nostrils flared. “How could you not know that it wasn’t meant for your use? Who do you think would have set up such an interlude?” Willow stood, unwilling to allow his jealous wrath to fall solely on Cullen’s shoulders, broad as they were. “I am so sorry, Mr. Seaborne. I should have realized—” He lifted his splayed fingers. “You were not to know, miss. But, Dempsey, you have no such excuse. I just told you that I had something special planned.”

© Becky Laney of Operation Actually Read Bible
Posted by Becky at 11:12 AM