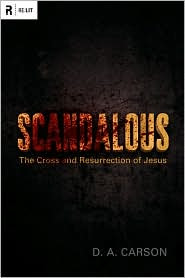 Scandalous: The Cross and Resurrection of Jesus. D.A. Carson. 2010. February 2010. Crossway Publishers. 173 pages.
Nothing is more central to the Bible than Jesus' death and resurrection. The entire Bible pivots on one weekend in Jerusalem about two thousand years ago. Attempts to make sense of the Bible that do not give prolonged thought to integrating the crucifixion and resurrection of Jesus are doomed to failure, at best exercises in irrelevance. Jesus' own followers did not expect him to be crucified; they certainly didn't expect him to rise again. Yet after these events their thinking and attitudes were so transformed that they could see the sheer inevitability that Jesus would die on a cross and leave an empty tomb behind, and absolutely everything in their lives was changed.
Scandalous: The Cross and Resurrection of Jesus is a collection of five messages from D.A. Carson. The five messages are:
The Ironies of the Cross (which focuses on Matthew 27:27-51a)
The Center of the Whole Bible (which focuses on Romans 3:21-26)
The Strange Triumph of a Slaughtered Lamb (which focuses on Revelation 12)
A Miracle Full of Surprises (which focuses on John 11:1-53)
Doubting the Resurrection of Jesus (which focuses on John 20:24-31)
I would definitely recommend this one. I thought each message was well written and quite relevant. I especially enjoyed The Center of the Whole Bible and A Miracle Full of Surprises.
Here are some quotes from "The Center of the Whole Bible"

When I do university missions today, for the most part I am speaking to biblical illiterates. The hardest truth to get across to them is not the existence of God, the Trinity, the deity of Christ, Jesus' substitutionary atonement, or Jesus' resurrection. Even if they think these notions are a bit silly, they are likely to responds, "Oh, so that's what Christians believe." They can see a certain coherence to these notions. No, the hardest truth to get across to this generation is what the Bible says about sin.
Sin is generally a snicker word: you say it, and everybody snickers. There is no shame attached to it. It is so hard to get across how ugly sin is to God. (41)

We live in an age where the one wrong thing to say is that somebody else is wrong. (42)

What is sin to one group is not sin to another group. But not only does the Bible insist that there is such a thing as sin, it insists that the heart of its ugly offensiveness is its horrible odiousness to God--how it offends God. (42)

"I'm looking for the kind of God I can believe in," you say. But this stance is both tragic and foolish, is it not? For it presupposes that the "I" is the ultimate criterion, the ultimate god. Surely, the real question is, "What kind of God is there?" Otherwise you are simply manufacturing your own god, and that is what idolatry is. (45)

While some of these messages are lengthy--especially when compared to traditional chapters--each one is broken into sections. So the book does remain reader-friendly.
© Becky Laney of Operation Actually Read Bible
Posted by Becky at 10:18 AM