Book Review: As Young As We Feel 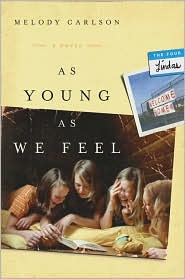 Marley had hoped that her former high-school friends might've grown up by their thirty-fifth reunion. Unfortunately she was disappointed. Oh, most of them had matured somewhat, at least externally. She observed more bald heads, wrinkles, and gray hair than she recalled from their last gathering, and she was relieved to see that many had let go of old cliques and social boundaries. But others, like Keith Arnold, were still jerks.

As Young As We Feel is the first book in a new series by Melody Carlson. And I'll gladly admit it has an interesting premise. Four women, all in their fifties, have one thing in common: they're all named Linda. Abby. Janie. Caroline. Marley. These four met in first grade, decided to go by their middle names forever more, and form the 'Four Lindas' club. They didn't necessarily stay friends after grade school, and certainly not after high school graduation. With three of the four moving out of their hometown of Clifden, Oregon. One to L.A. One to New York City. One to Seattle. This thirty-fifth high school reunion brings them all together--but not quite the way they expected. You see, Cathy Gardener, another classmate, drops down dead in the middle of the reunion, right there on the dance floor. Her death acts as a catalyst to these four taking the time to reanalyze their lives and their need for friendship.

By talking with each other, they learn that they have so much in common. They're unhappy, unsure, depressed, restless, emotionally drained. They feel hopeless, lost, lonely. They feel life has let them down. What can they do to reconnect with their lives? How can they turn their lives around? What can possibly inspire them to live life again?

Friendship may just be the first step in their journeys.


© Becky Laney of Operation Actually Read Bible
Posted by Becky at 9:45 AM