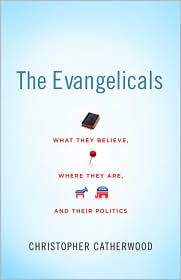 The Evangelicals: What They Believe, Where They Are, And Their Politics. Christopher Catherwood. 2010. August 2010. Crossway. 168 pages.

Let's take what many Christians call a basis of faith to describe what specifically evangelical Christians believe.

I loved this one. I just loved it. It was such a fascinating read. Why? Because it was so much more than theology. Yes, there are a couple of chapters on what evangelicals believe. Simple and straight forward. He uses the International Fellowship of Evangelical Students doctrine of faith. He also examines three different church vision statements--two in England, one in Washington D.C. (Capital Hill Baptist Church--9Marks) A rural British church. St. Andrew the Great Cambridge). And these chapters are crucial, fundamental.

But. What makes this book so much more than just another theological book is what comes next. For the first time perhaps, you'll think about the who and the where. Chances are you'll be surprised--maybe even really surprised--at what you learn in the following chapters!

From "Who Are Evangelicals?"


For many readers who might not know any professing evangelical Christians, the answer to this chapter's question might seem a simple one, if what you see in the newspapers is any guide. An evangelical is a white, middle-class male Republican from the southern part of the United States (or, as we now have to add, a white female Republican from the rural West of America.)...

But, in truth, this description presents a highly misleading picture, and also a dangerous one, as it confuses evangelicalism as a whole, which is a worldwide, global movement, with just a tiny segment of it, and gives it a political coloring that is utterly atypical of evangelicals in most countries today. For it is now widely said that the average evangelical is an economically poor black Nigerian woman with numerous family members suffering from HIV/AIDS.

So wrong gender, wrong skin color, wrong country, wrong social class--in fact wrong everything when it comes to the stereotype of evangelicals we commonly see on television or in the newspapers. For the fact is that the overwhelming majority of evangelical Christians today do not live in the West at all but in what most commentators refer to as the Global South, or the Two-thirds World, since most of the world live there. (71-72)

These chapters are very informative. Very thought-provoking. Think sociology and statistics. What we learn is that evangelical Christianity is thriving. Not just surviving--but flourishing in astonishing numbers. In countries where it is dangerous to be a Christian.


The strongly evangelical Church of Nigeria, part of the Anglican Communion, sees around 167,000 converts each year join their churches. That is almost the size of some entire countries in Europe or states in the United States. It is certainly bigger than the membership of some entire denominations in the West. This is spiritual growth on a most extraordinary scale, and shows that globally evangelical Christianity is on the rise, even while all kinds of Christian faith, evangelical included, are on the decline in the increasingly secular West. (83-4)

The book also discusses politics--past and present. How evangelicals--past and present--have been involved in society, in social reform, in politics, in government. How being an evangelical isn't about identifying with a certain political party. (Or isn't just about identifying with a certain party.) It isn't about being told what to think about party issues.

I loved this book! I did. I just loved it. It was fascinating and challenging. It was also very compelling. I would definitely recommend this one!!!

© Becky Laney of Operation Actually Read Bible
Posted by Becky at 11:56 AM