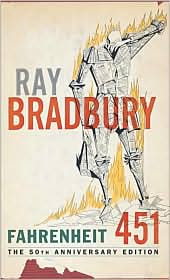 Our hero, Guy Montag, is a fireman. It is his job to start fires, to burn books. In Ray Bradbury's imagined future, intellectual thinking is too dangerous for the masses, as is reading. Thinking leads to feeling, and feeling leads to unhappiness, to self-awareness. To have a people aware of their feelings--their dissatisfaction, their differences, the true state of the world around them--would be dangerous. The threat of war is high in Fahrenheit 451. Yet, for all the concern people show, you'd hardly notice it. Why? Because people are too connected with the walls in their homes--their "families" on the screen--and listening to the shells in their ears. Guy's wife, Mildred, is just one of the mindless, pleasure-driven, 'family'-addicted individuals in this society. She has three walls--but she needs a fourth. She needs her family to surround her. It's not a big surprise that Guy Montag finds himself married to a stranger, unable to remember when they first met and why they fell in love. 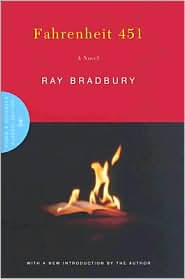 Guy Montag is a fireman with a secret. Though he knows he's breaking all the rules, he can't help himself from rescuing the occasional book--from hiding them in his own home. Yes, he knows if he gets caught then that will be the end of him. The books will be burned. He'll be killed or arrested. But. Since a conversation with a man--Faber, a former English professor--he hasn't been the same. Guy Montag can't help noticing the world around him; can't help noticing the war--the threat of war; can't help noticing how hopelessly lost the world has become; how horrible, how bleak the situation really is. He sees but doesn't quite know what to do about it. One day he decides to visit Faber. He brings him the Bible.


’It’s been a long time. I’m not a religious man. But it’s been a long time.’ Faber turned the pages, stopping here and there to read. ‘It’s as good as I remember. Lord, how they’ve changed it in our parlors these days. Christ is one of the family now. I often wonder if God recognizes His own son the way we’ve dressed him up, or is it dressed him down? He’s a regular peppermint stick now, all sugar-crystal and saccharine when he isn’t making veiled references to certain commercial products that every worshiper absolutely needs.’ (81)

Do you know why books such as this are so important? Because they have quality. And what does the word quality mean? To me it means texture. This book has pores. It has features. This book can go under the microscope. You'd find life under the glass, streaming past in infinite profusion. The more pores, the more truthfully recorded details of life per square inch you can get on a sheet of paper, the more 'literary' you are. That's my definition, anyway. Telling detail. Fresh detail. The good writers touch life often. the mediocre ones run a quick hand over her. The bad ones rape her and leave her for the flies.

So now do you see why books are hated and feared? They show the pores in the face of life. The comfortable people want only wax moon faces, poreless, hairless, expressionless. we are living in a time when flowers are trying to live on flowers, instead of growing on good rain and black loam. (83)

The novel is very intense. And Guy Montag's life is in danger, and his world is on the verge of collapse. But it's such a great, thought-provoking novel!!!

Earlier this month, I reviewed the graphic novel, Fahrenheit 451, at Becky's Book Reviews. It had been several years since I'd read the original novel, and I wanted to see if it had been adapted well. I enjoyed it so much, I decided to take a risk--to watch the movie adaptation. I expected many changes--it is a movie adaptation after all. So I wasn't particularly surprised by the change of which book our hero, Guy Montag, "becomes" at the close of the film. You see, in the book--and even in the graphic novel--Montag "becomes" Ecclesiastes. He reveals to his new friends--new allies--that he has a little bit of Revelation and some Ecclesiastes. The Bible is one of the books he'd hidden away--"rescued" from the flames he--as a fireman--was required to start. The novel closes with TWO scriptural references! Ecclesiastes 3:1-8 and Revelation 22:2.

© Becky Laney of Operation Actually Read Bible
Posted by Becky at 11:06 AM