Book Review: The Road to Paris 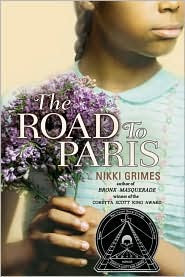 From the prologue: Ask Paris if a phone call can be deadly. She'll tell you. She learned the truth of it last night.

From chapter one: The trouble with running away is you know what you're leaving behind, but not what's waiting up ahead.

I loved this one. I just LOVED it. It's one of those oh-so-magical books for me. Proof that an author can weave faith into fiction. I first read The Road to Paris in 2006, and I've been wanting to reread it ever since. Today seemed like the perfect day to revisit an old friend.

What is it about? Paris and her brother, Malcolm, have been abandoned by their mom. They've been placed in a foster home together, but it's not a good match. It's an abusive situation. So Paris and Malcom run away to their grandmother's house. Unfortunately, she's only willing or only able to keep them a few days. Just until a new placement can be found. The good news? The next foster home is wonderful. Paris meets a great family--the Lincolns. She becomes a part of their lives. She becomes a part of their family. And Paris grows in strength and love. She learns how to keep God in her pocket. The bad news? She's separated from her brother. Yes, she's got two new brothers and a sister. Yes, she's got a new mom and dad who love her. Yes, she's making a few friends at school. Yes, she's joined the church choir. But. Paris can't forget about her brother. Can't help wishing that there was a way for them to be together again. There may be a way...but it won't be without sacrifice. Can Paris learn to trust God in any situation?

The Road to Paris tells the story of one girl's journey of healing and recovery.


Home was such a funny word. For most kids, home was where your mom and dad lived, where you felt safe, where the bogeyman was merely make-believe. Home was where you knew every square inch of the place by heart, where you could wake up in the middle of the night and know exactly where you were without opening your eyes. Paris didn't have a place like that. She didn't even have an address she'd lived at long enough to memorize, no single place that felt familiar as all that. Except maybe the city itself. For Paris, home was more a person, and that person was Malcolm. (30)

The next evening, when Paris and David were alone in the dining room setting the table, David said out of the blue, "I used to be afraid of the dark. And of the bogeyman, and of spiders--all sorts of things." "Really?" said Paris. "Really." "What did you do?" "I started keeping God in my pocket." "Huh?" "It's something my mom told me once. To keep God in my pocket." "I don't understand. How can God fit inside your pocket?" "No that's not it. It just means to keep God close, you know, like he's right there, in your pocket, close enough to call on, or to talk to. That's what I do when I'm afraid." "And that helps?" "Yup. Sure does." And that was all he said on the subject. But it was enough. It was something she'd never forget. (41)

She wasn't afraid anymore. Not of being beaten, or being locked in the closet. Not of the dark, or of never seeing Malcolm again, or of nobody wanting her. . .Paris could hardly recognize the fearless person she was turning into. . .She was learning to keep God in her pocket, and because she had him to talk to, she was beginning to have faith that she'd be all right. (103)