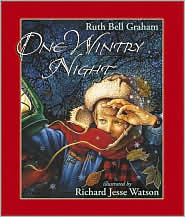 The boy hunkered down and yanked his cap further over his ears as the wind rose to a roar across the ridge.

While I may not have loved One Wintry Night, I did appreciate the concept. This one isn't quite a picture book, and it isn't quite a chapter book. It's definitely designed for reading aloud--in my opinion. It tells the picture of a young boy, Zeb, who twists his ankle and finds refuge in a mountain cabin with an elderly woman who is more than happy to have a guest for the holidays. (The two are snowed in together, by the way.)

During their time together, she recounts the Christmas story. But she doesn't start with Matthew or Luke or even John. No, she starts with Genesis--with the account of creation, with Adam and Eve and the fall of mankind, with the introduction of sin and death to God's perfect world. Through each chapter, Zeb, learns how God's story of redemption has been revealed. Through stories about Abraham, Moses, Samson, Samuel, David, Daniel, etc.

This one doesn't end with Mary, Joseph, and the newborn, swaddled babe, either. For Zeb asks--as you might have guessed by now--how a baby could save the world, how a baby could be a savior. So she continues her story through Jesus's life, death, and resurrection.

I liked the concept of this one. I think adults and children alike need to remember why Jesus was born--to save us sinners. To remember that this newborn babe whom we celebrate in song each December was born to die. He was destined for the cross. And I think it is important to connect the Easter-message with the Christmas one. And I've not read that many books--especially for children--that attempt such a "big picture" method.

I didn't like everything about this one, however. There were a few places, here and there, where I was disappointed with how she chose to tell the story. And probably, my biggest complaint, is how the life of Jesus is portrayed through the eyes of "Aaron and Anna" two children who witnessed his birth in Bethlehem and later (as grown-ups) witnessed his death and resurrection in Jerusalem. Personally, I didn't need these invented "eyewitnesses" to tell the gospel story. The rest of the book--the chapters covering the Old Testament bible stories--didn't have invented narrators. It just felt like an odd choice, to me.

In a way, it shares a concept with Andrew Peterson's Behold the Lamb album. But. It succeeds in its attempt. It is an AMAZING album--a "Christmas" album that you can listen to every day of the year!