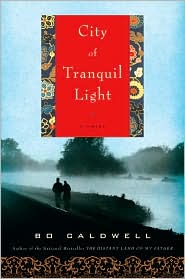 Suppose it is an autumn day, fine and clear and cool. Late afternoon, when the sun nears the horizon and turns the sky into a watercolor of pastels. It is beautiful, as though God is showing off.

I don't know if I could love this book more if I tried. It's just that good. I didn't just love it. I LOVED, LOVED, LOVED it. I found myself slowing down as I read it just because I didn't want to say goodbye to it. (How often does that happen? Not very often, especially with contemporary literature!) The fact that this book was NOT published by a Christian publishing company, yet so clearly and emphatically brought glory to God and his kingdom, well, it thrilled me!

So what is it about? Well, it's about a husband-wife missionary team. Will Kiehn, our hero, is just an ordinary young man from Oklahoma, who feels called by God to join a mission team heading to China. He meets his future wife, Katherine, on the mission trip. For she has felt the call as well. She's a nurse. Both Americans are eager to go to China, to learn the language, to learn the culture. They want to be used by God where they're needed. And it doesn't take long for them to fall in love with China and with each other. (He picks up the language faster than she does, so naturally, he decides to tutor her in her studies.)

Growing up, Will never thought he'd be anything but a farmer, but, God had different plans for him. And soon he's doing God's work in a foreign country with his wife by his side. It is NOT an easy life. Far from it. But even in the hardest times, even with tears running down their faces, both feel that this is where they belong, this is their home now, their country. For better or worse, they're there to stay. There are plenty of dramatic moments with City of Tranquil Light. There were many places where I felt such a STRONG emotional reaction to the book. I just came to care so much, so deeply, for the characters. And their story was both beautiful and inspiring. Not that they were perfect. Not that they were goody-goody.  They never come across that way at all. It's just that the book is so God-centered, in my opinion. A true testament to how God uses real people to do his work here on Earth.

Most of the novel tells of their lives in China, from 1906 to 1933. After they returned to the United States, they settled near Los Angeles, he became a pastor at a Chinese church--where he was able to teach and preach in Mandarin! So even though they were no longer able to live in China--as they both would have wished in the best of circumstances--they were still able to minister to the Chinese! I won't tell you how this one ends, but it was sadly, perfectly beautiful.

© Becky Laney of Operation Actually Read Bible
Posted by Becky at 7:35 AM

Well, that's a glowing review if I ever read one! Looks like this will have to go on my ever-expanding to-read list! :)

I just had to come see what this book was about because I love the title. It sounds like a very good book. Thanks!