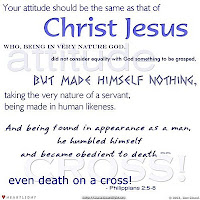 He always had the nature of God, but he did not think that by force he should try to remain equal with God. Instead of this, of his own free will he gave up all he had, and took the nature of a servant. He became like a human being and appeared in human likeness. He was humble and walked the path of obedience all the way to death--his death on the cross. For this reason God raised him to the highest place above and gave him the name that is greater than any other name. And so, in honor of the name of Jesus all beings in heaven, on earth, and in the world below will fall on their knees, and all will openly proclaim that Jesus Christ is Lord, to the glory of God the Father.

© Becky Laney of Operation Actually Read Bible
Posted by Becky at 8:09 AM