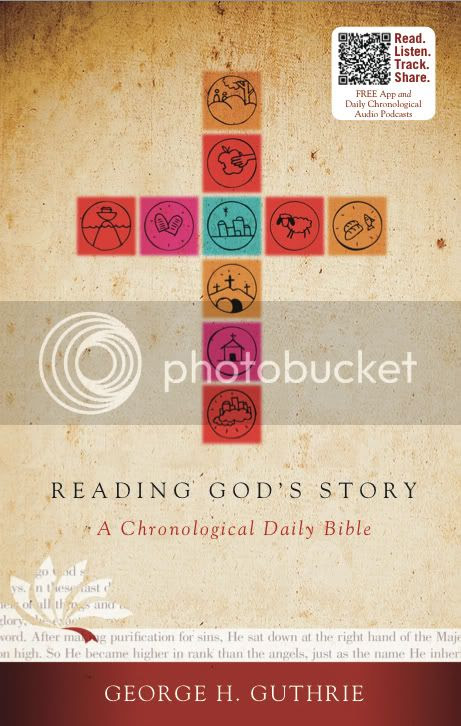 I bought Reading God's Story the day it released this November. I'd been anticipating its release since the summer. And I mean anticipating. (Buying a new Bible makes me giddy.) I started using it immediately. If I'd been a more patient person, perhaps, I might have seen the logic in waiting until January 1. Since this is a daily Bible. (Though NOT DATED). The readings are divided into weeks and days. 52 weeks for the entire Bible, six readings per week. But I just couldn't wait.

I love many, many, many things about Reading God's Story. But I'll try to pick a few to highlight for you.

It is divided into acts and scenes. Each act and scene are introduced. These serve as a way of understanding, comprehending the big picture.


The readings are chronological. That may not seem all that helpful when you're in the books of Moses (Genesis, Exodus, Leviticus, Numbers, Deuteronomy), but once you really get started, it's very helpful having 1 Samuel, 2 Samuel, 1 Kings, 2 Kings--not to mention ALL those prophets--integrated with 1 and 2 Chronicles. You'll be able to read the prophets at the the historical place they were prophesying to Judah (or Israel, etc). And all of the stories about the kings will be together. The New Testament is also arranged differently. (If you've never looked at a chronological Bible you might just be surprised at how different it is.)

Each day's readings are clearly marked. But they're not dated. You can read at your own comfortable-to-you pace. If you do follow the Bible's reading plan, you'll finish in a year. But it doesn't have to be that strict. I don't know about you, but dated reading plans can intimidate me. Reading "January 25" in February or March, etc., it's hard to not feel guilty or disappointed.

2011 is the first year I read the Holman Christian Standard Bible. And I am a little surprised at just how much I do like it. But it's a good translation, and I'm happy to have it in this chronological Bible. Before buying this Bible--weeks before, actually--I read the New Testament in this translation. I then made it a goal to read the Old Testament in Reading God's Story. I plan to read the New Testament in Reading God's Story at some point next year. (Maybe even for my Read-the-New-Testament-in-a-Week event the first week of April!)