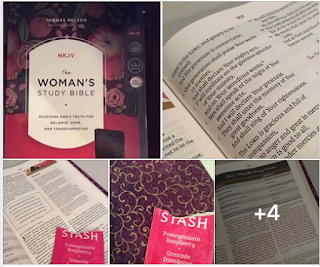 First sentence: In the beginning God created the heavens and the earth. The earth was without form, and void; and darkness was on the face of the deep. And the Spirit of God was hovering over the face of the waters.

I bought this one when the physical Lifeway stores were closing and everything (yes, everything) was being clearanced out. It was a bittersweet time. On the one hand, I bought probably four or five Bibles that I wouldn't have gotten otherwise. On the other hand, not much time goes by--a week, perhaps two or three--where I don't MISS Lifeway and wish that they were still open.

I had an earlier edition of the Woman's Study Bible in the NKJV that came out in the 1990s. It drove me CRAZY because the text was broken down into syllables. I HATE, HATE, HATE that "special feature." That was my reasoning as to why I "needed" this one. (The fact that it was clearanced certainly helped.) 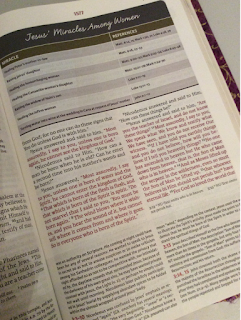 This Bible is HEAVY. Granted, it is large print, or should I say "large print." You would think that for its weight it would actually feature text that was actually actually LARGE print. If the font size is 11 points like the page says, it is absolutely the SMALLEST 11 point I've ever stumbled across. It looks more like 9 points--possibly 10. The note size is listed as 7. That I'd believe. It is absolutely TINY. Almost insultingly so! The notes are absolutely impossible to read no matter how much you squint. Since the notes are impossible to actually actually read, you'd be better off going with a text-only large print or "large print" bible.

I wouldn't mind the weight of the Bible IF the weight was justified by actual large print.

It is red letter.

The layout is beautiful--absolutely beautiful. But it is impractical to have a beautiful bible with notes so impossible to utilize.

I didn't notice much bleed through in the pages.


© Becky Laney of Operation Actually Read Bible
Posted by Becky at 11:31 AM