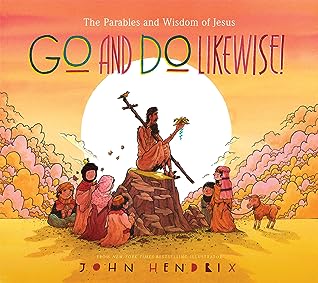 Go and Do Likewise: The Parables and Wisdom of Jesus. John Hendrix. 2021. [February] 40 pages. [Source: Review copy]
First sentence: Jesus's sandals were always dusty. Jesus didn't call any one place home. But he was not alone. Alongside Jesus were his students, the twelve disciples.
In 2016, John Hendrix gave us Miracle Man: The Story of Jesus. I definitely enjoyed it. I wasn't expecting a follow up book, but was pleasantly surprised to see that he has a new book out called Go and Do Likewise: The Parable and Wisdom of Jesus.
The 'wisdom' shared here mainly comes from the Sermon on the Mount. (I would say with a few bits perhaps from the gospel of John.) The parables come mainly (though not exclusively) from the gospel of Luke. Expect The Good Samaritan, the Lost Sheep, the Prodigal Son, etc.
What is shared, in my opinion, for better or worse, focuses on ethics: how to be a good, decent, kind human being.
Hendrix definitely puts his own spin on the stories. What do I mean by spin? Adding his own interpretation and commentary. This isn't all that unusual for bible story books. I think every author is 'guilty' of it to a certain degree or another. But adding details--opinions, observations, making conclusions--to the text that simply aren't in the original (in any translation) can be theologically tricky. I think he adds what he adds for storytelling purposes. He wants to tell an engaging story to a young audience. He's not out to quote the Bible verse by verse by verse.
The story of the Good Samaritan can be found in Luke 10:30-37.
The original verse: And by chance a priest was going down on that road, and when he saw him, he passed by on the other side.
That's it. That's all the Bible says about the priest in the parable. Hendrix, however, spins a different tale:
But a priest of God, the ones you see in the temple, was also traveling this lonely road. As he looked upon the dying man, the priest feared for his own life--or perhaps didn't want to get his fine clothes dirty--and passed by him on the other side of the road without stopping to help.
The original verse: Likewise a Levite also, when he came to the place and saw him, passed by on the other side.
Again, Hendrix spins a tale with motives: A short time later, a Levite, a person who also worked in the temple, came along the road. He, too, saw the wounded man, and blaming the man for his own carelessness, left him in a puddle of dirt and blood.
Hendrix definitely spins the Beatitudes as well. The Beatitudes can be read in Matthew 5:3-12.
Original: Blessed are the poor in spirit, for theirs is the kingdom of heaven.
Hendrix: Blessed are those who feel like an empty jar. God will fill that emptiness with abundance.
Original: Blessed are those who mourn, for they shall be comforted.
Hendrix: Blessed are those who cry, for the Lord sees every tear. Each one, He will wipe away.
Original: Blessed are the merciful, for they shall receive mercy.
Hendrix: Blessed are those full of mercy, for they, too, will be shown grace.
Original: Blessed are the peacemakers, for they shall be called sons of God.
Hendrix: Blessed are those who work for peace. They understand what it means to be God's child.
He definitely doesn't include every single Beatitude. He leaves some off--not a criticism, just an observation. (He leaves off gentle, hunger and thirst, pure in heart, the persecuted).
The narrative style is unique as are the visuals. The layout very much stresses the visual arts. The text is almost secondary in importance. This makes it slightly difficult to read in places. It also shifts it, in my opinion, to a slightly older audience. (As opposed to a beginning reader.)
© Becky Laney of Operation Actually Read Bible
Posted by Becky at 6:29 PM