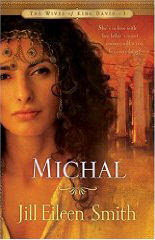 Michal ducked as a shard of pottery soared past her head.

I've been looking forward to this one for years. Okay, maybe just one year. But still. I was so excited to get a chance to read this one. Here we have the story of David...from Michal's perspective. Michal has never been presented as a sympathetic character in the biblical narrative. She is one of those that falls more into the 'didn't-quite-get-it' camps. But when you think about it--really think about it. Michal's actions are understandable, all-too-human. Maybe it wasn't easy being married to the guy who had a heart after God's own. Yes, David was a good guy, a good king. But a good husband? It would be hard to prove one way or the other.

What did I like about this one? The novel is from Michal's perspective. And it's a human one. Michal doesn't have the benefit of knowing what we know. Of knowing just how big David was in God's plans. Of knowing that God had a sovereign hand in David's would-be kingdom. The decades where King Saul sought his life. His battle for the throne. His reign. With this novel, perhaps for the first time, I can imagine being in her shoes. Of being in that rock-and-a-hard-place torn between her emotionally unstable royal father and her all-too-absent husband. The two--Michal and David--wed. But within a year (or possibly two) of their marriage, King Saul goes mental. David's on the run for his life. Here. There. Everywhere. In and out of Israel. Always staying a step or two ahead of his father-in-law. Where is Michal? Did he take his wife with him? No. She's back at home. Under her father's control. Saul is so angry, so vindictive, that he annuls his daughter's marriage. Gives her to another man. Now imagine living with him for close to two decades. This second husband. Then imagine the shock of having your father and brother killed. The instability of not knowing who will be king when all is said and done. Would you root for your brother or for your ex-husband? How would you feel after all this time has gone by? Where would your loyalty be? The husband you've been with the longest? Or your probable first love? When King David comes to power, Michal is commanded back into David's life. No longer the only wife. Now she is one of a handful. Still the 'first' wife perhaps. But she's also the daughter of Saul. And that can be dangerous being his kin at this time. Conflicted. Michal is bound to have felt conflicted. Shuffled and passed around...always under the control of someone...either her father, the king, or one of her husbands. No wonder Michal seems to have an attitude problem in scripture.

Recommended for those that like Christian fiction or biblical fiction.