Question of the Week #12 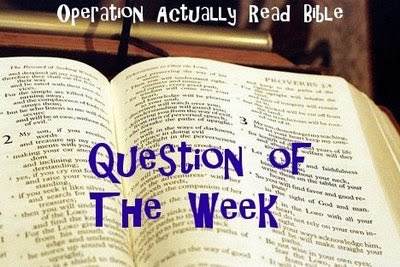 Welcome to the twelfth edition of the Question of the Week! Please consider sending me your ideas for future questions :)

Do you ever find yourself conflicted when reading books--does your faith ever stand in the way of you 'enjoying' other books--secular books? Do you try to read only Christian books? Do you read 'secular' books regularly? Have you ever enjoyed a book but hesitated to share it with your Christian friends? Do you think you should judge a book critically looking through the lens of faith...or do you think that fiction is fiction and that it's just a story? When does entertainment become dangerous?

This question was in part inspired by a recent review I read of Coraline. (The movie which they rated as "very offensive.") I haven't seen the movie, but I have read the book. And while I didn't love, love, love the book. (Just enjoyed it.) I certainly didn't bring a thousand and one spiritual implications to it. Didn't see it as an attack of Christianity by any means. But I wasn't looking for places to be offended. The other thing that inspired me was the release of Twilight, the movie. (Compare it to that site's review of Twilight, which they rated positively. My question? Does lack of sex between Bella and Edward really make this one Christian-friendly? Yes, it's good that the two don't have sex. But it isn't from Bella's lack of desire. She'd have Edward in an instant. Especially in later books she is begging for it all the time. It is his old-fashioned values and his restraint that keep the two from having sex before marriage. Bella's no role model--or at least she shouldn't be for young girls.)

I think one's faith will always effect your reading of a book in (at least) a small way. You can't divorce yourself from your faith completely. But it doesn't have to be the only way you see the world. In other words, I don't look for ways to be offended. I don't bring to my reading the attitude that I need to scrutinize and examine every single word (and punctuation mark) for hidden-and-not-so-hidden attacks, affronts, and slams to the Christian faith. If you go into it with the idea that every single book you read is dangerous and offensive, then you'll find lots of dangers and offenses.

That being said, some things DO offend me. Some things I do feel uncomfortable with. There are books that I categorize as not-for-me because they clash so much with my faith and worldview. There are books that I would say are better left unread by Christians and their families. But I would never go out of my way to act as an alarmist either. There is no one way for a Christian to react to a book. There isn't an absolute "the christian's reaction" to this or that book or movie. You see a large spectrum of reviews, reactions, responses to every thing. And just because one Christian is offended doesn't mean that every Christian will be.

Reading is subjective. I can HONESTLY SAY that there are books and movies which I wish to this day that I hadn't read or watched. Because I wish I could purify my mind.

But I think the more strongly you're grounded in the faith--in the word of God; in your relationship with Jesus--the better you'll be. "Dangerous" ideas can't shake your faith if it's strong and grounded.

Labels: Question of the Week

Hi Becky, you certainly have a thought-provoking question this week.

I avoid lots of books and movies that I think will "pollute" my thinking. And I don't mean just "dirty" ones. I gave up Christian romances many years ago because they encouraged me to be dissatisfied with my marriage - My husband never seemed quite as romantic/wonderful as the book heroes. (I know a lot of women will disagree with me on this, but for me it was a wise decision at an important juncture in my marriage.)

Some secular books I've read haven't been explicit but have left me feeling spiritually bankrupt because the characters themselves were empty.

YET I'm not a fan of modern Christian literature, which is often poorly written with a sermon tacked on.

I am always on the lookout for books that will build my heart and mind and I find them in both the secular and Christian markets. Thanks to the book blogging world discovering these books has become a whole lot easier.

I guess that I am inclined to judge a book for what it is and the style of writing and how well its is written rather than the objective message within it. That said, sometimes I get offended. I'm only human.

My view is that God has his hand in a lot of writing even when the writer is not Christian or trying to put out a Christian message.

My example is the Movie "Brokeback Mountain" based on a short story by Annie Proulx. I loved both the story and the movie. My Christian friends ridiculed me for it. My view is that although the characters were viewed sympathetically, their lives and the lives of those they loved were a total wreck. They had no positive outcomes. I viewed the story as not necessarily pro or anti gay but about the lives of two people who did not live with integrity.
About the only time I get offended is when somebody is going to out of their way to be offensive.
I don't really try and purify myself by what I read.
What do I think is dangerous? Pornography is definitely dangerous, hate literature is dangerous also.

Thank you both for joining in.

I know what you mean, about the emptiness. And spiritually bankrupt is a good word for it.

Yogi, I agree with you. Pornography is dangerous. And it's a slippery slope--in my humble opinion. You get yourself there in baby steps. Never thinking that you're getting in over your head. But all the same getting stuck in quicksand and sinking deeper and deeper.

Good questions this week! My answers are here:

I read mostly secular books. It's just what I'm drawn to, what I like. I find many Christian books overly preachy, forceful in the witnessing they try to do. Now...it's different if the book is non-fiction, in that respect it's expected to be what the description states. Fiction on the other hand, often it's just "too much" for my liking.

This being said, my faith does most definitely come into play with the secular books I read. I have picked up many a YA title, only to put it down after a page or a chapter because the language or the overt sexuality are too heavy, not only for my taste, but for young adults in general.

I think Yogi said it wonderfully... that God has His hands in everything, even in secular authors. I read books for their stories, for the messages they give, I simply would like that message to be appropriate for the group it is geared towards. And if it's not, my faith and love for the Lord will allow me to put that book down.

I read both secular and Christian ficton, and if something bothers me like graphic descriptions of sex, I put down the book immediatly. Many of the book groups I belong to on Yahoo! always have at least once a year an Ian McEwan book. I do not read his books because of the sexual discrptions he has in his books. I like the way Debbie Macomber handles sex in her books. My denomination-The United Church of Christ-accepts everyone, even if you are gay or a lesbian. The same goes for books. If someone recommend a book at church, I will jot down the title and author's name on my church bullitin.


My current favorite Christan series is the Yada Yada Prayer Group books. Not only it is set on the north side of Chicago, (I live in the Southwest suburb of Oak Lawn which borders Chicago) and alot of the places the author (Neta Jackson) mentions in her books are familiar to me, but also I wish that her charaters are real persons because I want to meet them all. If wishes were fishes. I highly recommend this series. Judy(IB)