Book Review: No Woman So Fair 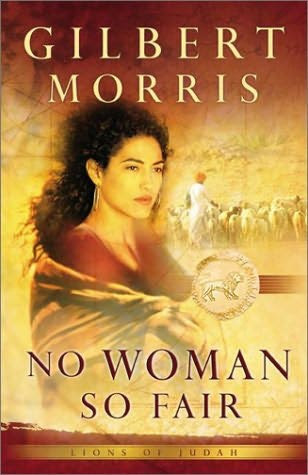 Biblical fiction. This is the second title in Gilbert Morris' Lions of Judah series. It is the story of Abram and Sarai. It begins off shortly before their courtship, and it spans til the fateful day when Abraham listens to God, (the Eternal One) and prepares to sacrifice his son, Isaac. So to say the least, it spans a LOT of time. Much more than the traditional novel.

It's always interesting to see how biblical fiction goes. After all, the main threads of the novels are inspired by the bible. And the writer usually tends to follow the story as laid out in the bible. Though almost always they add their own touches: new characters, secondary story lines, inner motivations, and character growth. Because it is true that while we know what bible characters did some of the time--we don't know how they felt.

I liked this one. I liked it more than the first novel in the series actually. But I still have a few little concerns here and there. I'm not liking the whole medallion/necklace/talisman-esque theme going on. How there is this lion-medallion necklace that has been passed down through the generations. It tracing all the way back to Seth. This necklace as proof that that individual is the chosen one, the one through whom "the lion" will come, the messiah who will save the world from their sins. First of all, while I can respect that it is playing on the prophecy that Jacob (then named Israel) is giving to each of his sons on his death bed. There is no indication at all that this "lion" foreshadowing has been going on for thousands of years. What I do believe is that messianic prophecies and signs are sprinkled throughout scripture--beginning with Genesis 3. And it is entirely possible that faithful generations taught their children that God would provide a Messiah. Though it always seems that the unrighteous outnumber the righteous. But I just have trouble grasping that a family heirloom could pass through that many generations...as a symbol of God's blessing and grace...and as a sign of his promise...that it will be your line (your geneological line that is) through whom it will come...and at the same time...not become a hindrance whether than a blessing becoming endowed with mystery, mysticism, and magic. (The bearer of this necklace is "the one" of his generation. The blessed. The favored one.) I don't think that was his intent. At all. And I can see why he'd want to employ a symbol to tie the generations together. To weave the story into a whole. To prepare readers to grasp the big picture.

So it's not that I didn't like the book. I did. Mostly.

Becky, you are an awesome reader and reviewer. I do about one book every two weeks, if I stay focussed.