Book Review: Anything But Normal 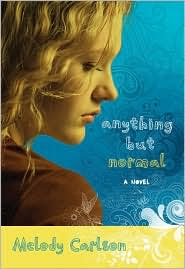 Anything But Normal. Melody Carlson. 2010. [January 2010] Revell. 254 pages.
I wasn't crazy about the title of this one. I think normal is a loaded word, and it's one I try to avoid when possible. I think it's a word that can be packed with a lot of judgment. And sometimes these are judgments we place on ourselves. And sometimes these are judgments others place on us. But. I guess that's a whole other story.
What is this one about? Well, it's about a Christian teen becoming pregnant. While she's away at a Christian summer camp. It's about the lies she tells herself, and the lies she tells others. It's about guilt and shame. It's about judging and misjudging others. It's about how words can hurt. Just as much as actions. At times.
Sophie, our heroine, is so ashamed of her "condition" that she denies the pregnancy altogether. Keeping one big secret from her family, from her friends, from her church, from her classmates. Sophie has some judgmental friends. No question about that. And some of these judgmental friends have judgmental parents. They've been raised that being right is more important than being loving. Her friends are callous, in my opinion, and so is Sophie in a way. Especially in the beginning. There were times when I thought that every single person was missing the big picture, being so fundamentally clueless. But. Sophie does begin to change. Mostly.
I thought this novel was a bit clumsy in places. And I don't know how quite to explain what I mean by clumsy. I think it was definitely an issue novel. Sometimes it was a quiet issue novel; sometimes it was a loud and demanding ISSUE NOVEL. There were a few elements in the plot that I found a little unbelievable. (I'm thinking of the sudden uproar of protest against the school's pregnancy center; the angry parents demanding this and that and calling for town meetings, etc. And then with one little speech from Sophie, all is made well again. Not only has the uproar blown over, there is now so much love and support that many now want to volunteer at the pregnancy center.)
Do I think the subject matter important? Yes. Of course I do. I think teen pregnancy is an important issue. I think more needs to be said than "it's bad" and "don't do it." I think it's important to show unconditional love. That becoming pregnant as a teen, out of wedlock is not the unforgivable sin. It's not something outside of grace. Grace and love extend to both mother and child.
Available January 2010 at your favorite bookseller from Revell, a division of Baker Publishing Group
© Becky Laney of Operation Actually Read Bible
Posted by Becky at 4:40 PM