Book Review: We're All In The Same Boat 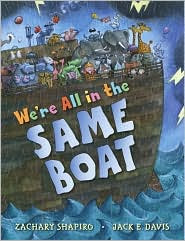 We're All In The Same Boat. Zachary Shapiro. Illustrated by Jack E. Davis. 2009. Penguin. 32 pages.
It rained and it rained. It rained so much that Noah had to build an ark to protect all the animals.
As much as I like the story of Noah. I can be a bit of a harsh critic when it comes to picture-book-Noah's. But. I did like this one. I liked it for what it was. A playful story showcasing the animals and the alphabet. And manners. I shouldn't forget that element of the story! (Don't expect God and his grace (or man and his sinfulness) to enter into this one. It's not a religious story.)
What do I mean when I say that it showcases the alphabet? Shapiro's text is playful. What were the animals on the ark like during these days and nights of relentless rain???

The ants were antsy.
The bees were bored.
The camels were complaining.
The dogs were demanding.
The elephants were enraged.
The foxes were frantic.

What was it like to be Noah? To be this Noah? It's no wonder that he has to yell and shout, "We're all in the same boat!" Can Noah make these animals behave? Can he turn the mood of this boat around?
It's a playful book. A silly book. I can appreciate it for that.
© Becky Laney of Operation Actually Read Bible
Posted by Becky at 10:52 AM

Sounds fun! Thanks for sharing!