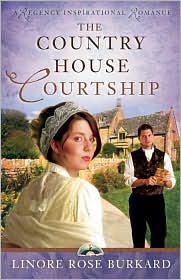 The Country House Courtship. Linore Rose Burkard. 2010. Harvest House. 287 pages.
Mr. Peter O'Brien felt surely he had a devil plaguing him, and the devil's name was Mr. Phillip Mornay.
I enjoyed this one very much. It is the third in a series of Regency Romances by Linore Rose Burkard. The first being Before the Season Ends and the second being The House in Grosvenor Square. It has been several years since Ariana Forsythe has married the oh-so-charming, and once-so-intimidating Mr. Phillip Mornay--years which have seen the birth of two children. When the book opens, the reader sees the once embittered (now repentant) former suitor of Miss Ariana. Mr. O'Brian. A curate. He's had to humble himself a bit in seeking a job interview with his former rival. What he was not expecting was to arrive at the Mornay's country estate to find Miss Ariana's younger sister there for an extended stay. The now-almost-fully-grown-and-ready-to-be-wooed younger sister. The story of The Country House Courtship is her story. Miss Beatrice's story. Will Beatrice and Peter make a match? Or will Beatrice be fooled by the dashing Tristan Barton?
If you're a fan of Regency romances--clean Regency romances--consider Linore Rose Burkard. The Country House Courtship is probably my favorite of the three!
© Becky Laney of Operation Actually Read Bible
Posted by Becky at 8:34 AM