Book Review: Out With The In Crowd 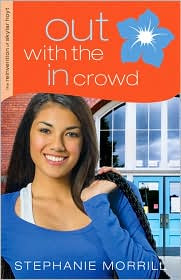 Out With The In Crowd by Stephanie Morrill. 2010. [January 2010] Revell. 252 pages.
All winter break, I'd planned for this moment, the one about to happen.
Skylar Hoyt may be beautiful--her mom is Hawaiian--and popular, but that doesn't mean her life is perfect. Far from it. A senior in high school, Skylar should be preparing for college, making plans for living her own life. Instead, Skylar is spending most of her time worrying about her family. Her younger sister, Abbie, is pregnant. And her mom and dad are separated and talking divorce. Add to the mix some seriously complex and conflicted relationships with her friends, and it's no wonder Skylar is feeling lost.
There is just something so high school about Out With The In Crowd. Here are just a few of the complications in Skylar's life: Eli--her ex-boyfriend; Jodi--her ex-best-friend, and the current girlfriend of Eli; and Connor, her current boyfriend, but Jodi's ex-boyfriend. Of course, that's just the very beginning...
Out with the In Crowd is the second novel in the series. Me, Just Different is the first. (I haven't read it.)
© Becky Laney of Operation Actually Read Bible
Posted by Becky at 8:55 AM