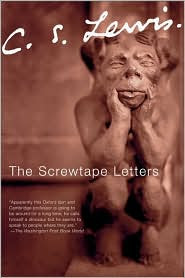 My dear Wormwood,
I note what you say about guiding your patient's reading and taking care that he sees a good deal of his materialist friend. But are you not being a trifle naive? It sounds as if you supposed that argument was the way to keep him out of the Enemy's clutches. That might have been so if he had lived a few centuries earlier. At that time the humans still knew pretty well when a thing was proved and when it was not; and if it was proved they really believed it. They still connected thinking with doing and were prepared to alter their way of life as the result of a chain of reasoning. But what with the weekly press and other such weapons we have largely altered that. Your man has been accustomed, ever since he was a boy, to have a dozen incompatible philosophies dancing about together inside his head. He doesn't think of doctrines as primarily 'true' or 'false', but as 'academic' or 'practical', 'outworn or 'contemporary', 'conventional' or 'ruthless.' Jargon, not argument, is your best ally in keeping him from the Church. 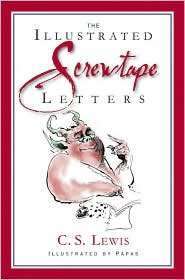 Thus begins C.S. Lewis' Screwtape Letters. A series of letters--fictional, of course--written by Screwtape and addressed to his nephew Wormwood. Wormwood's patient--his human, a man--has recently become a Christian. It is Wormwood's intent to keep his patient from following the Enemy, from becoming attached to his new Savior, from following this new Way of life; Wormwood is hoping that he can be won back, tempted back, to their side, the dark side. But how is his 'patient' to be kept from the Way? Can advice from a superior demon help him succeed?
As you can imagine reading The Screwtape Letters is a bit topsy-turvy. Everything GOOD becomes bad. And everything BAD becomes good. The Enemy is God Almighty. And Satan is Our Father Below. Once the reader becomes oriented to this, then things should flow smoother.
So what can Christian readers gain from reading this one? Well, I'd say it's all food for thought. Reading The Screwtape Letters gives you something to think about, to consider. It makes you think about how you live and how you think. Especially thought-provoking, in my opinion, are Screwtape's thoughts on the Church. How the Church can be twisted in such a way that it keeps people further away from God.

"One of our great allies at present is the Church itself. Do not misunderstand me. I do not mean the Church as we see her spread out through all time and space and rooted in eternity, terrible as an army with banners. That, I confess, is a spectacle which makes our boldest tempters uneasy. But fortunately it is quite invisible to these humans." (5)
"When he gets to his pew and looks round him he sees just that selection of his neighbors whom he has hitherto avoided. You want to lean pretty heavily on those neighbors. Make his mind flit to and from between an expression like 'the body of Christ' and the actual faces in the next pew. It matters very little, of course, what kind of people that next pew really contains. You may know one of them to be a great warrior on the Enemy's side. No matter. Your patient, thanks to Our Father Below, is a fool. Provided that any of those neighbors sing out of tune, or have boots that squeak, or double chins, or odd clothes, the patient will quite easily believe that their religion must therefore be somehow ridiculous." (6)
"What he says, even on his knees, about his own sinfulness is all parrot talk. At bottom, he still believes he has run up a very favorable credit-balance in the Enemy's ledger by allowing himself to be converted, and thinks that he is showing great humility and condescension in going to church with these 'smug' commonplace neighbors at all. Keep him in that state of mind as long as you can." (9) 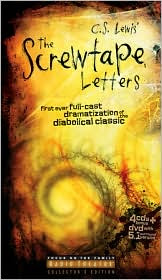 Not all the letters carry the same weight, but there are some great ones.

"You will say that these are very small sins; and doubtless, like all young tempters, you are anxious to be able to report spectacular wickedness. But do remember, the only thing that matters is the extent to which you separate the man from the Enemy. It does not matter how small the sins are provided that their cumulative effect is to edge the man away from the Light and out into Nothing. Murder is no better than cards if cards can do the trick. Indeed the safest road to Hell is the gradual one--the gentle slope, soft underfoot, without sudden turnings, without milestones, without signposts." (60-61)

There is a great audio production of this which I reviewed last year.
© Becky Laney of Operation Actually Read Bible
Posted by Becky at 8:12 AM