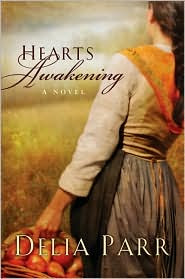 While other women her age were busy preparing a hearty breakfast for their families in snug, warm homes that crowded the city or dotted the outlying farms, Elvira Kilmer was hurrying down an unfamiliar roadway, hugging the woods along the eastern shoreline of Dillon's Island to meet a total stranger.

Ellie is a 'spinster' who is dependent on her cousins. It is Cousin Mark who has arranged for Ellie to keep house for widower, Jackson Smith. He has two children, two young boys Daniel and Ethan. And he sure could use some help around the house, in the kitchen especially. His house has been one big mess since his wife, Rebecca, died. (He's too busy in the orchards to keep up with it all.)

Ellie was expecting to work for Mr. Smith for two weeks. Long enough to get a good reference letter, but that's all. She wasn't looking for anything long term. And marriage was about the last thing on her mind. But when Jackson proposes...despite how he proposes...it gives her something to think about.

This would be a marriage of convenience, a marriage in name only. He needs help raising his two young boys. And he needs help around the house. And whether he'd admit it or not, he does needs a companion, a friend. But he's not looking for more, he's not looking for love. He's been hurt a few too many times. And besides this spinster is so very plain, so very unattractive, he reckons that he'd never fall in love with her.

She says yes. Not without giving it good thought. And not without being offended first in how he proposes. And even why he proposes. But at the end of the day, she has come to care for those little boys. And they do need a mother. And why couldn't that mother be her? After all, she's always wanted children of her own.

Will this marriage turn into a love match? Or will secrets keep love from blossoming?

I liked this one. At times I even loved it.

Ellie is a woman that I appreciated. She was a lot more patient than I would have been! And she was a bit more forgiving too! Was she too perfect, too good to be true? Well, that's something each reader will have to decide.

Jackson, well, I had mixed thoughts on him. There were places where I could see how Ellie would feel the way she does. He was easy to like in some ways. But in other places, I got really angry. Super angry even. He's definitely a flawed man. A man with some baggage, some issues that need working out. But he had his good qualities too.

I did love the story. I never tire of this premise. Yes, I know it's been done dozens of times. But. It still works for me.

Historical Fiction/Romance. Set in the 1840s in Pennsylvania.