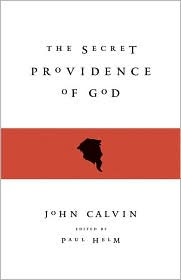 The Secret Providence of God by John Calvin. Edited by Paul Helm. 2010. Crossway Publishers. 128 pages.
Your doctrine certainly has many supporters, John Calvin, a man who nearly all men renown but who likewise has many adversaries. I truly desire there to be one doctrine, just as there is one truth, and for all to agree in the same way.
The Secret Providence of God by John Calvin is a very strange, very interesting little book. The book was written in 1558. And it is Calvin's third response to Sebastian Castellio. Both men seem to have delighted in arguing with one another in print. In engaging in very heated theological arguments.
Calvin's book was in direct response to Castellio's latest accusations. So Calvin begins his book by including his enemy's accusations. Readers first read the opposition. (This is "Calumniator's Preface to Certain Articles." It's printed on gray paper which makes it easy to differentiate.) Calvin then responds. And boy, does he ever respond! Point by point by point. The argument is on the doctrine of God's providence. (Which I suppose could also fall into God's Sovereignty and the doctrine of predestination.)
The book is interesting in that while it sets forth Calvin's thought on the biblical doctrine of predestination and God's sovereignty, God's providence, it at the same time was attacking a person who disagreed with Calvin theologically. Of course, readers see this other person provoking it. The insults were well-matched. Still, it's strange, at least to modern eyes to see this lively debate be so personal.
Because this one is so lively, it was anything but boring.
© Becky Laney of Operation Actually Read Bible
Posted by Becky at 10:27 AM

The Sword of King Arthur said...

Such a great post on secret providence of god.