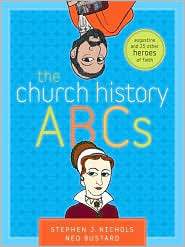 A is for apricot, apple and Augustine--Africa's ancient bishop.
When I was a young boy, I took some pears that did not belong to me. I did not want the pears; I just enjoyed doing wrong. But God loved me and Christ died to forgive all my sin. Years later when I was serving as a bishop, I wrote two famous books. And I worked hard to remind the church that God loves us before we love him.

I wanted to like The Church History ABCs more than I did. I wanted to love it. What it sets out to do is introduce to children--elementary-age children--26 'important' church figures. Each entry is written in the first person. (The entries vary in quality.)
The 26 are not equally important. Some great men are left out while lesser men are included. In an alphabet book, it really does all come down to the first letter of the last name. Some of those included are relatively well known--Augustine, John Calvin, Jonathan Edwards, Martin Luther, Charles Spurgeon, John and Charles Wesley. Others were new-to-me like Absalom Jones, Bishop Nicholas Ridley, Zacharias Ursinus, Florence Young, and Francis Xavier. Quite a few were familiar--but not in a religious context--like Lady Jane Grey and Anne Bradstreet. The book includes men and women.
What I did not like about this one were the irrelevant examples in each entry.
E is for eggs, elephants and Jonathan Edwards.
N is for noodles, nachos, and John Newton, writer of "Amazing Grace"
If your child is old enough to comprehend the historical and religious significance of heroes of the faith, then he/she does not need to be reminded that noodles start with the letter n. Though The Church History ABCs is an 'alphabet book', it is for older children.
I also found it funny that John Owen's entry was mostly about John Bunyan and Pilgrim's Progress. Nothing about that entry tells us why Owen was significant, or what Owen believed or taught. It was all about how he played sports, and knew John Bunyan.
© Becky Laney of Operation Actually Read Bible
Posted by Becky at 8:18 PM