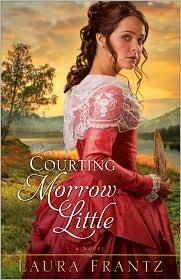 Red River, Kentucke
July 1765
Morrow paused on the river trail to wipe her brow with the hem of her linsey shift. It was a true Kentucke July, and the woods were hot as a hearth, the leaves of the elms and oaks and sycamores curling for lack of water, the dust beneath her bare feet fine as flour. Even the river seemed like bathwater, its surface still and unbroken as green glass.

From the first chapter:

Fort Pitt, Pennsylvania
June 1778
Morrow took out a painted paper fan, her gloved hands trembling, and recalled the look of horror on her aunt's face moments before when she'd embarked, as if she'd stepped into a coffin instead of a keelboat.

Morrow Little, our heroine, was just a young girl when Shawnee warriors murdered her mother and baby sister and kidnapped her brother Jess. Morrow and Pa were spared--being away from the cabin--but they're haunted nonetheless by what they found that summer day. When the novel opens, Morrow is a young woman. She's had a few years in the East with her aunt. She's learned how to be a lady, a woman. Now, she's returning to her father, to Kentucke.
If it was up to her aunt, she'd never step foot on the frontier ever again. But Morrow feels her place is with her father, who's not in the best of health.
Once she arrives, Morrow finds many men in the community are smitten with her. Though not all think she's equally prepared for the harshness of frontier life. No one is more smitten than the determined soldier, Major McKie. But McKie would not be her choice for her husband. Nor her father's choice. Yet he has a way of intimidating Morrow's other suitors.
Her father wants to see his daughter married. Not because he doesn't love her. He does. But because he knows he's dying. And before he dies, he wants to be sure that his daughter will have a home, will have someone to care for her, someone to provide for her, cherish her. He doesn't want her to marry just anybody. He wants what is best for his daughter. And he has a good idea that Major McKie is not the one.
Who is her choice? The answer might just surprise you! It certainly surprised the community!
I just loved Laura Frantz's The Frontiersman's Daughter. It was one of my favorite reads of the year. So I was super excited to read Courting Morrow Little. And it didn't disappoint me. I loved Morrow. I loved Red Shirt. I loved the richness of this historical novel. I found it very satisfying.
© Becky Laney of Operation Actually Read Bible
Posted by Becky at 12:56 PM

Bless you, Becky. Your review is one that I most look forward to. Thank you for taking time for my books! That means so much to me. Happy reading!

I loved this book!