Book Review: How To Pray 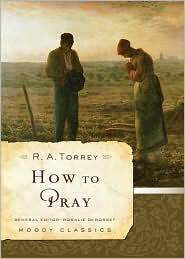 R.A. Torrey's work on prayer may have been published over a hundred years ago, but I found it ever-relevant. What Torrey has to say on the subject of prayer--on the matter of prayer--is a detailed study of what the Bible says on it. And though he's using the English Revised Version (1881) instead of a more modern translation, what he has to say is still reader-friendly.

Is it easy to understand How to Pray? Yes and no. Yes, in that Torrey approaches the subject in a matter-of-fact way. In a this-is-what-the-Bible-says-about-prayer way. He doesn't over-complicate issues by trying to be scholarly or profound or poetic. No, in that the matter of prayer itself is sometimes confusing.

For example, one chapter might explain how God is always there listening to us, ready to forgive us, heal us (though not always physically heal us), restore us, use us. And another chapter might explain how God doesn't hear us because we're not being obedient or because we're not forgiving others or because we're not in right relationship with a spouse or parent, etc. So some chapters were a bit confusing. Especially considering how he stressed we had to be in the right frame of mind for prayer, that we had to wait until we felt we were in the presence of God no matter how long it took, but that we also couldn't work ourselves into that emotional state. In a way, it seemed--at face value--that there were a lot of rules about prayer. But. I don't think he exactly meant to say that praying to God was super-complicated.

So I thought it was a thought-provoking examination on prayer. I liked the attention to detail. How he discusses one Scripture passage after another after another after another. He seemed very thorough, very precise in his writing. Never for a minute did I doubt where Torrey was getting his message. Still. It made me realize how much more there is to learn. Where I might need to focus on my study, on my meditation. And that has to be a good thing, right?

R.A. Torrey was very bold in his writing. He wasn't afraid to offend. And perhaps his message wouldn't have been quite as offensive as it would be today. Maybe. But Torrey definitely sees things as either right or wrong. And for Torrey, that meant smoking, drinking (drinking irresponsibly), playing cards, dancing, going to the theatre, reading immoral novels, etc. He even saw golf as a sin because it took you away from God's work! So would Torrey be popular with today's crowd? Probably not. But can today's modern Christian learn from him? I think so! Maybe not about every little thing--like golf--but in the big things, the Bible-based things--I think there is much to learn!

I love R.A. Torrey, I have a book of his on the Holy Spirit.
Thank you for your review.

This was my first chance to read R.A. Torrey! And I must admit that I'm a fan!!! I think I have one or two more of his books on the shelf. I can't remember their exact titles now--but I do hope to read more at some point!!!