Book Review: Through Gates of Splendor 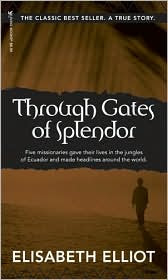 The Santa Juana is under way.

This biography has become a classic, and not without good reason! For within its pages, Elisabeth Elliot tells the story of five missionaries who became martyrs for Jesus Christ. Jim Elliot, the author's husband, Nate Saint, Roger Youderian, Ed McCully, Pete Fleming. Five men, five very different men. Readers learn how each came to Christ. See how each one was called to serve, to give. Not only called to serve in general. But each called to serve specifically. God is in the details. God led each man to want to go to Ecuador to reach the native tribes who had not yet heard the gospel. Though each was initially called to serve different tribes, different regions within the country, each came to see that God was leading them to serve together, to reach out to one tribe, perhaps the tribe with the worst reputation, the people in the most need of hearing the good news of Jesus Christ. In the first edition of the book, these people are called Auca. A word that means "savage" in one of the neighboring languages. It's not until the second epilogue, that readers learn the tribe's name for themselves, Waorani.  God was writing their story. And he was preparing them day by day, week by week, month by month to accomplish HIS will. Preparing them to serve, to love, to give. Giving them strength and courage and desire. Giving them peace and joy and hope. (Not that they didn't have their down moments, not that they didn't have their discouraging moments. But they were living for Christ. They were ready TO LIVE OR DIE for Christ. No matter the outcome, they knew that they were right where God wanted them to be. And they trusted that whether they lived or died, Christ would get the glory, that HIS will would be done, HIS purposes accomplished.)

This book focuses on their time in Ecuador--the years leading up to January 1956. I won't lie. I won't say that I found it compelling and powerful from the first page. But. By the end, I was swept into the story. It was powerful and compelling and emotional and beautiful and haunting and terrible and wonderful all at the same time.

I agree with Annette, it's hard to read this book without looking at the heart of it all. Would you give your life for the sake of Christ Jesus? Would you be willing to go where he sends you? Willing to give the LORD full control of your life? Willing to put God first in ALL things?

Great review Becky!
Happy Easter my friend, you are a blessing!

I read this book when it was first published. It is a classic among the books written by missionaries.