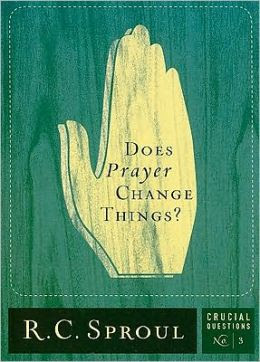 What is the goal of the Christian life? It is godliness born of obedience to Christ. Obedience unlocks the riches of the Christian experience. Prayer prompts and nurtures obedience, putting the heart into the proper "frame of mind" to desire obedience. Of course, knowledge is also important because without it we cannot know what God requires. However, knowledge and truth remain abstract unless we commune with God in prayer.

This is the first book I've read from R.C. Sproul's "Crucial Questions" series on the basics of Christianity. I found it to be a WONDERFUL read. I loved how accessible it was. I loved how practical and general it was too. It does not answer just one or two questions about prayers--it covers many! Yes, one of those questions leads to the title of this one. The book covers what prayer is AND what prayer isn't. The book consists of six chapters: The place of prayer, the purpose of prayer, the pattern of prayer, the practice of prayer, the prohibitions of prayer, and power of prayer.  Some time is spent on The Lord's Prayer, examining what it means exactly and showing how it can be used as a model of sorts for our own (original) prayers. I would definitely recommend this one!


Prayer, like any means of growth for the Christian, requires work. In a sense, prayer is unnatural to us. Though we were created for fellowship and communion with God, the effects of the fall have left most of us lazy and indifferent toward something as important as prayer. Rebirth quickens a new desire for communion with God, but sin resists the Spirit.

Prayer is the secret of holiness-if holiness, indeed, has anything secretive about it.

Luther said that he prayed regularly for an hour every day except when he experienced a particularly busy day. Then he prayed for two hours.

John Calvin, in the Institutes of the Christian Religion, makes some profound observations regarding prayer: But, someone will say, does God not know, even without being reminded, both in what respect we are troubled and what is expedient for us, so that it may seem in a sense superfluous that he should be stirred up by our prayers-as if he were drowsily blinking or even sleeping until he is aroused by our voice? But they who thus reason do not observe to what end the Lord instructed his people to pray, for he ordained it not so much for his own sake as for ours. Now he wills-as is right-that his due be rendered to him, in the recognition that everything men desire and account conducive to their own profit comes from him, and in the attestation of this by prayers. But the profit of this sacrifice also, by which he is worshiped, returns to us. Accordingly, the holy fathers, the more confidently they extolled God's benefits among themselves and others, were the more keenly aroused to pray ... Still it is very important for us to call upon him: First, that our hearts may be fired with a zealous and burning desire ever to seek, love, and serve him, while we become accustomed in every need to flee to him as to a sacred anchor. Secondly, that there may enter our hearts no desire and no wish at all of which we should be ashamed to make him a witness, while we learn to set all our wishes before his eyes, and even to pour out our whole hearts. Thirdly, that we be prepared to receive his benefits with true gratitude of heart and thanksgiving, benefits that our prayer reminds us come from his hand. (Calvin, Institutes of the Christian Religion, trans. Ford Lewis Battles, ed. John T. McNeill [Louisville: Westminster John Knox, 1960], Book 3, chapter 20, section 3.)

Prayer, like everything else in the Christian life, is for God's glory and for our benefit, in that order.

Spoken prayer is obviously a form of speech, a way for us to commune and communicate with God. There is a certain sense in which God's sovereignty should influence our attitude toward prayer, at least with respect to adoration. If anything, our understanding of God's sovereignty should provoke us to an intense prayer life of thanksgiving. Because of such knowledge, we should see that every benefit, every good and perfect gift, is an expression of the abundance of His grace. The more we understand God's sovereignty, the more our prayers will be filled with thanksgiving.

In a sermon titled "The Most High, a Prayer-Hearing God," Jonathan Edwards gave two reasons why God requires prayer: With respect to God, prayer is but a sensible acknowledgement of our dependence on him to his glory. As he hath made all things for his own glory, so he will be glorified and acknowledged by his creatures; and it is fit that he should require this of those who would be subjects of his mercy ... [it] is a suitable acknowledgement of our dependence on the power and mercy of God for that which we need, and but a suitable honor paid to the great Author and Fountain of all good. With respect to ourselves, God requires prayer of us ... Fervent prayer many ways tends to prepare the heart. Hereby is excited a sense of our need ... whereby the mind is more prepared to prize [his mercy] ... Our prayer to God may excite in us a suitable sense and consideration of our dependence on God for the mercy we ask, and a suitable exercise of faith in God's sufficiency, so that we may be prepared to glorify his name when the mercy is received. (The Works of Jonathan Edwards [Carlisle, Pa.: Banner of Truth Trust, 1974], 2:116)

It is only because we are in Christ and Christ is in us that we have the privilege of addressing God as our Father and of approaching Him in a filial relationship. Martin Luther once said that if he could just understand the first two words of the Lord's Prayer, he would never be the same again.

The unbeliever rationalizes his sinfulness, but the Christian is sensitive to his unworthiness.

Another great barrier to articulate praise is ignorance. We suffer not so much from a limited vocabulary as from a limited understanding of the One whom we are adoring. Our worship also suffers from a lack of knowledge of God...How does one pen love letters to an unknown God? How do the lips form words of praise to a nebulous, unnamed Supreme Being? God is a person, with an unending personal history. He has revealed Himself to us not only in the glorious theater of nature, but also in the pages of sacred Scripture. If we fill our minds with His Word, our inarticulate stammers will change to accomplished patterns of meaningful praise. By immersing ourselves in the Psalms, we will not only gain insight into the how of praise, but also enlarge our understanding of the One whom we are praising.

God is never required to be merciful. As soon as we think God is obligated to be merciful, a red light should flash in our brains, indicating that we are no longer thinking about mercy but about justice. We need to do more than sing "Amazing Grace"-we need to be repeatedly amazed by grace.

One of the marks of a true Christian is that he never quits fighting [sin]. He doesn't always win, though he will win the ultimate battle because of Christ. If a person ever does give up the fight, then he has truly embraced the evil, legitimizing it. In short, he condones it, even allows it.

© Becky Laney of Operation Actually Read Bible
Posted by Becky at 10:39 AM