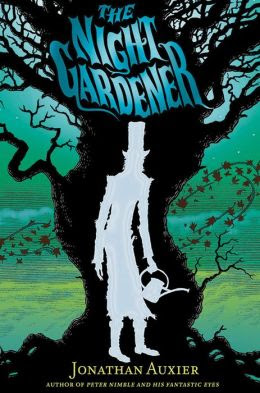 Our sins are often as dear to us as our children! We love them, hug them, cleave to them and delight in them! To part with them, is as hard as cutting off a right hand or plucking out a right eye! But it must be done. The parting must come. J.C. Ryle, Holiness


The Night Gardener is probably my favorite 2014 publication, and, it's the only (new) book that I've read this year and already reread. It's that kind of good.


Of man's first disobedience, and the fruit of that forbidden tree, whose mortal taste brought death into the world, and all our woe.


We would often be sorry if our wishes were gratified.

I love The Night Gardener for many reasons.

I love the symbolism. I love, love, love it. I think this is a book that Christians of all ages should read again and again. Parents may want to read it before handing it to their children to make sure it's age-appropriate, of course.

I love the characters. I love how flawed they are. Both Molly and Kip are very easy to relate to. The first time I read this one, I was focused more on Molly. The second time I read this one, I focused more on Kip. Honestly, I love these two so much. I also was able to pay more attention to each member of the Windsor family. The mom (Constance), the dad (Bertrand), the brother (Alistair), the sister (Penny). I do still enjoy Hester Kettle (the storyteller).

I love the story. This one has it all: atmospheric setting, suspense, mystery, and action. It is a book that is almost impossible to put down. It is intense. It is emotional. It is one that I just connected with from the very start.

I love the writing. I LOVE, LOVE, LOVE the writing. I do. It is one of the best written books I've read all year. The language--the phrasing--is beautiful. It is rich in description. And did, I mention, the symbolism?!

I love what it's about. I love that it is about lies and truth, good and evil, right and wrong.

I love the world-building. I love, love, love the legend within the book. This legend "of the night gardener" is found in chapter thirty-one. (209-213)

First sentence: The calendar said early March, but the smell in the air said late October.

Descriptions of 'the tree':


"There's something about this land that draws folks in, even when every bone in their bodies is telling them to run far, far away…" (107)

He had noticed a number of low branches around the base of the trunk, which he thought might provide a boost to reach the higher limbs. He reached for a branch but stopped short of touching it. The branch was dark and smooth and slightly curved. It wasn't a branch at all--it was the handle of an axe. The handle looked very old and had become a part of the tree. Kip could see the swollen knot of bark where the tree had swallowed the axe head. He stared at the other "branches" sticking out from the base: a crude hatchet, the stub of a hunting knife, a rusted bucksaw, even what looked like the hilt of a broadsword. Some of the handles looked centuries old, others looked more recent--but every one of them had failed in its purpose. "It's like a regular battlefield," he said, his voice a whisper. (129)

"So you think he's tied to the tree, like a leash?" "I think it's deeper than that. I think they're connected…He's a slave to that tree, and the only way for him to on livin' is to keep it alive." "I hardly call that livin'." Kip pulled his coat tight. "But that's how the tree works, ain't it? It gives you what you wish for but not in a way that makes things better. I suppose that's the difference between what you want and what you need." Molly nodded. "Maybe that's what Hester really meant when she said it takes your soul." (273)

Descriptions of the house:


The air smelled stale, like an attic. Dust and dry leaves crowded the corners. Cobwebs dangled lazily from lamps and furniture. But strangest and most alarming by far was the presence of the tree, which seemed to have insinuated itself into the very architecture: crooked limbs grew straight through the plaster walls, thick roots pushed through the floorboards, and a broad, twisted branch hovered just below the high ceiling like a black chandelier. She stepped over some muddy tracks, peering into the unlit hallway. (19)

Molly took a shaky breath. "If this house is makin' you sick, then why do you stay?" Constance creased her lips. "I could ask you the same thing…but I already know the answer." Her dark gaze drifted to Molly's side, "Those letters you keep in your pocket--" Molly started. "You know about the letters?" Constance waved off her alarm. "Not their precise contents, mind you. I've seen you pouring over them when you think you're alone. But, of course, no one's ever alone in this house, not truly." She glanced toward the branches towering over the roof. "I remain here for the same reason you do. I would no sooner leave this place than you would burn those letters." Molly put a protective hand over her apron pocket. "Never…" Constance smiled. "Exactly. Without the tree, without its gifts, we would be completely unmoored." She sat back in her chair. This time, when she took her teacup, she used both hands so it would not shake. "I should think that a touch of fever is a small price to pay for such a bounty." She sipped. "Wouldn't you agree?" (221)

Descriptions of 'the night gardener':

He walks through the whole house, room to room, and then he's gone. I asked Mummy about him, and she said I just made him up. But I'm sure I didn't, because some mornings I see the footprints he's left behind. They're muddy and shaped wrong and I don't like them." (64)

The man was working at the foot of the big tree. his clothes were tattered and worn, but his skin was as white as soap…the man's gaunt face was half-hidden behind a long, unkempt beard. The wells of his eyes were darker than pitch--like a shadow's shadow. The man carried with him a collection of old gardening tools. (120)


For as long as Molly could remember, she had possessed a gift with words. It was not magic, exactly. Rather, it was a way of talking that made other people believe in magic things, if only for a moment. (22)

"There's nothin' so great about me," she said. "I'm just a servant. And you're just a beggar."
Hester shook her head. "Don't confuse what you do with who you are, dearie. Besides, there is no shame in humble work. Why, Aesop himself, the king of storytellers, was a slave his whole life. Never drew a free breath, yet he shaped the world with just three small words: 'There once was.'" (201)

A story helps folks face the world, even when it frightens 'em. And a lie does the opposite. It helps you hide. (278)


His father had carved the crutch from the branch of a fallen wych elm on the farm back home. It was strong and thick and had just enough spring to be comfortable when he walked. His father had named it "Courage," saying that all good tools deserved a good title. Kip had always liked the idea that courage was a thing a person could hold on to and use. (15)


To demand promises to to invite disappointment. (197)

Lizards aren't snakes, but they can still bite. Worse, they're bad luck in a garden. So folks have an old trick for gettin' rid of 'em. What you do is wait till just before sundown, when the air's cool but the lizards ain't yet gone into their holes. You take a red-hot rock from the fire and set it in the middle of the garden. The lizards--why, they hate the cold, and they'll come runnin' straight for that rock and curl up right on top o' it. Come mornin', you'll wake to find 'em still on that rock, their bodies cooked alive." She turned back. "You see: the rock saves 'em from chill only to kill'em in its own way." (231)