Book Review: No Adam, No Gospel 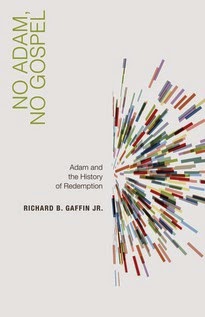 No Adam, No Gospel: Adam and the History of Redemption. Richard B. Gaffin Jr. 2015. P&R Publishing. 32 pages. [Source: Review copy]

The booklet "No Adam, No Gospel" addresses a contemporary issue. Did Adam and Eve really exist? Are the opening chapters of Genesis historically accurate? Can a person believe wholeheartedly in evolution and wholeheartedly in the gospel? Does it even matter if Adam and Eve were real? Would it matter if they were just a made-up story to illustrate a point? How essential is it for believers to actually believe that the Bible is true in matters big and small? And is it fair to assume that this would be a "small" matter?! And who would get to decide which things were "big" and which were "small"? It's always a horrible idea for anyone to decide which parts are true and which parts aren't.

He writes, "What Scripture affirms about creation, especially the origin of humanity, is central to its teaching about salvation. If it is not true that that all human beings descend from Adam, then the entire history of redemption taught in Scripture unravels."

For Adam and Christ are connected. Jesus is referred to as the "Second Adam." In the doctrine of imputation--clearly taught by Paul in Romans 5, and in many other places beside--Adam and Jesus are clearly connected in Scripture.

Therefore, just as sin came into the world through one man, and death through sin, and so death spread to all men because all sinned— for sin indeed was in the world before the law was given, but sin is not counted where there is no law. Yet death reigned from Adam to Moses, even over those whose sinning was not like the transgression of Adam, who was a type of the one who was to come.
But the free gift is not like the trespass. For if many died through one man's trespass, much more have the grace of God and the free gift by the grace of that one man Jesus Christ abounded for many. And the free gift is not like the result of that one man's sin. For the judgment following one trespass brought condemnation, but the free gift following many trespasses brought justification. For if, because of one man's trespass, death reigned through that one man, much more will those who receive the abundance of grace and the free gift of righteousness reign in life through the one man Jesus Christ.
Therefore, as one trespass led to condemnation for all men, so one act of righteousness leads to justification and life for all men. For as by the one man's disobedience the many were made sinners, so by the one man's obedience the many will be made righteous. Now the law came in to increase the trespass, but where sin increased, grace abounded all the more, so that, as sin reigned in death, grace also might reign through righteousness leading to eternal life through Jesus Christ our Lord. Romans 5:12-21, ESV.

Richard B. Gaffin Jr. responds to recent books and articles by a handful of different theologians. He presents how different people have interpreted "problem texts" like Romans 5. He also addresses the subject generally.

The booklet is a quick read. It is packed with information. Though it doesn't treat the subject absolutely or exhaustively. It is more of an introduction to the controversy.