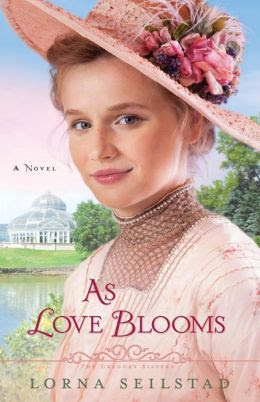 As Love Blooms is the third book in the Gregory Sisters trilogy by Lorna Seilstad. The first book, When Love Calls, focuses on the oldest sister, Hannah. The second book, While Love Stirs, focuses on the middle sister, Charlotte. In the first book, readers are introduced to the three now-orphaned sisters. When the first sister finds happily ever after, the other sisters find an instant family and move in with his suffragist aunt (Lincoln's Aunt). Also readers should know that in the first book, the sisters pledges to help one another's dreams come true.

So Tessa's settled on a dream. She's a horticulturist. She wants to be hired as a gardener at Como Park in Saint Paul, Minnesota. The problem? Well, the man in charge, Mr. Nussbaumer, doesn't want to hire her because she's a woman. He doesn't want to discourage her from gardening--private gardening. But there's a small chance she can change his mind…

Reese King has met Tessa and been wowed. He was equally wowed by her gardening designs. His idea? To work on the garden together at the park, taking credit for the design and the work, and then if his boss LOVES it, he'll confess it to be her design. The two hardly know one another, and it does seem like a risky agreement--at least to me--but she's desperate for a chance. It turns out he is as well.

Will these two fall in love as they work side-by-side? Perhaps. But if so, it won't come easily. For Tessa likes to spend time with another young man with ambitions of his own…

I liked this one. I didn't love it as much as While Love Stirs. For one thing, I thought the book was a little too dramatic in places, especially towards the end.

I would still recommend all three books, however.