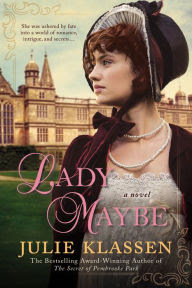 There's good news and bad news. Which to start with?! I'll start with the good news, I suppose.

I can honestly say that there is nothing within Lady Maybe that could be considered preachy. The first slight evidence of "Christian content" comes in at around three hundred pages. The main character, Hannah, prays or speaks of praying. And another character reminds her that Jesus forgives all who ask. I can also say that the characters are certainly sinners living in a sin-filled world. For example, the main character is a "fallen woman". (I'll include spoilers towards the end.*) And the hero himself has made some big mistakes. The characters subtly point to the message that forgiveness is offered to all by Christ. I say subtly because there is nothing preachy--nothing obvious--about this one.

Now, the bad news. The bad news is that there is very little distinctively Christian content within Lady Maybe. It would be unfair for me to generalize that all readers of Christian romance read exclusively Christian romances, or, that Christian readers avoid secular romances. But some readers--at least--do exclusively read Christian romances, and, there is a reason for this. They want their romances to be clean, absent of graphic details, a high purity quality especially between unmarried characters, but lacking of intimate details even between married characters. (Some secular books are capable of this. Georgette Heyer, for example, comes to mind.) But sadly, more and more Christian romances are failing this standard. Some readers perhaps--like myself--have learned the hard way that reading "smutty books" is spiritually dangerous or unwise. Some readers hold themselves accountable to a higher standard, not caring what everyone else is reading, or what everyone else considers fine for reading.

Lady Maybe is a Regency Romance set during 1819. Marianna and Sir John are unhappily married. She has had a lover since the very beginning. Sir John is aware of his wife's cheating, but, hopes that if he keeps on forgiving her that even if it takes three hundred or so chances, that their marriage might eventually work out. Hannah Rogers, the heroine, has been in and out of their lives. She was first hired to be a companion for Marianna, (Lady Mayfield). She left her job--suddenly--and then returned a year later asking for past wages. She ended up getting rehired as a companion for the Lady. The couple is--for better or worse--moving yet again. Sir John is trying to "hide" his wife from his lover and cut off all communication between the two. But an accident within the first few chapters of the book changes everything….

Lady Maybe is a secret-driven, surprise-heavy historical romance. The characters are well-drawn. Marianna. Hannah. James Lowden. Sir John. Becky (the wet nurse). Dr. Parrish. Mrs. Parrish. Mrs. Turrill, the housekeeper. I could go on. There were plenty of characters that I genuinely started to care about and/or got the chance to know. That is a strength, I won't deny it. I have read Christian romances where 90% of the characters are completely one-dimensional and essentially lifeless. That is not the case with Lady Maybe.

Was it compelling? Yes. I admit that it was. But was it bordering on inappropriate for picky readers? Yes. I think it was.

Hannah, the heroine, is a fallen woman. During her employ, she was seduced by Sir John who was angry and hurt by his wife's cheating. He arranges another job for her so they do not continue to fall into sin. He's worried that so long as she's in the house--she'll be a constant temptation to him to commit adultery. He also chooses that time to move with his wife. Hannah keeps her pregnancy a secret, and has Sir John's child with him being no wiser for it. Hannah's sudden re-entry for their lives is a bit of a shock for him. But what can he say when his wife surprises him within two or three minutes of them getting into the carriage to leave for their new home?! Readers, of course, know nothing of their past. As I said, this is a secret-driven romance.

The carriage tumbles off a cliff, and Sir John and a woman are recovered. Everyone assumes that the woman by his side is his wife. And she is, in fact, clutching a ring belonging to Lady Mayfield. As you might have guessed--as I guessed almost right away--Hannah is that woman. Sir John does recover, but, he finds it wonderfully fun to have a new "Lady Mayfield." And he's beyond thrilled to learn that he has a son, Danny. (Danny was brought to their home while Sir John was still in a coma.) He loves putting Hannah in tricky situations. Asking the doctor when he can start sleeping with his wife again. Insisting that she sleep by his side.

But Sir John is not Hannah's only temptation. James, Sir John's solicitor, comes around. He is anxious to prove that Lady Mayfield is TROUBLE. But, he falls in love with her himself. It doesn't help that he ever-so-accidentally comes across a just-finished-bathing still-very-extremely-exposed Hannah. James becomes a little lust-driven to say the least. He learns her true identity, and, is relieved that she isn't Marianna after all. He has heard too many stories about her.

The book has dozens of twists and turns, and, yes, I've spoiled a small number of them. It isn't so much the fact that Hannah is a "fallen woman" who has had a child out of wedlock that is objectionable. It is the amount of graphic detail involved in the storytelling--past and present. Now this "graphic detail" might be laughable compared to other SMUTTY ROMANCES published secularly. But for any reader who finds such content undesirable, it will be disappointing or frustrating.

© Becky Laney of Operation Actually Read Bible
Posted by Becky at 10:33 AM