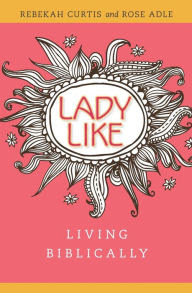 It might be tempting to call these chapters "devotional" but that wouldn't be the truth, not the exact truth. Yes, one could read this book in place of a devotional book, and, perhaps maybe even get more out of it than the typical devotional.

But these essays--these chapters--are food for thought. Even when written in a humorous style, they're meant to be taken seriously. One of the things I most appreciated about this one is the variety of narrative styles used throughout. Each chapter almost does stand alone. Each one speaks for itself.

It doesn't matter if you're young or old, or somewhere in between. It doesn't matter if you're single, married, or widowed--if you've had kids or not. The authors are talking to YOU. (One of the most frustrating things for me is when  books "for women, by women" assume that all women are naturally married and have at least a couple of kids. This book makes no assumptions.)

I also appreciated how straight-forward and unafraid these women are to speak the truth as they see it, even knowing that speaking "the truth" could lead to disagreement or controversy. If the Bible says it's true--it's true. Don't look to modern-day feminists who may or may not claim to be Christ-followers for the answer you're looking for--hoping for--turn to the Word of God.


But what we're offering here are thoughts aimed to ground our functions, identities, and lives in Christ our Lord as He reveals Himself to us in His Word.

I enjoyed the whole book, but, several chapters stand out as MUST-READ. "The Pie Eating Contest" comes to mind.

This is how it begins:


A little girl walked into a kitchen and saw a delicious pie on the table. The little girl squealed with delight, "I want to eat it all." "You can't eat it all," her mother replied. "It wouldn't be good for you." End of discussion. Many years later, another kitchen and another pie. This time, there's a different response. It smells so good! It looks so good! The girl, now a grown woman, squeals, "I want to eat it all!" And everyone cheers. Yes, to the pie! Yes to the eating of it all! Go you! She starts in on the pie and life is sweet. After a few large slices, she's a little bit surprised that having it all is not as easy or as enjoyable as she had anticipated.


The people of God always appear to be on some wrong side of history from a human perspective. Running afoul of human "wisdom" can be awkward or even dangerous. But the believer knows it is far more dangerous to be on the wrong side of the God of history. It can never be wise to live counter to the wisdom of the world's maker.

The children of God cannot lead holy lives when the Word of God is not taught in truth and purity.

Avoiding topics that might not be well received is refusing to treat someone like a reasonable adult.

The human animal wants cupcakes, oversleeping, and sex, all without consequences.

But Jesus died for the celibate person as much as He did for the beloved spouse (not to mention the unbeloved spouse). "Precious in the sight of the Lord is the death of His saints" (Psalm 116:15), no matter how many people show up for a particular saint's funeral. Every person ever born is a testimony to the love and power of the Creator, and His love for any one of us is greater than the love all of humanity combined could offer.

What Jesus wants from us is repentance, every day of our lives. He would rather have us be holy than self-actualized. It is better for us to die daily to sin than to open that cookie shop or write that novel or finish that degree.

The true Church does not ordain women; neither will women of the true Church permit themselves to be ordained or submit to anyone who teaches contrary to Scripture.

© Becky Laney of Operation Actually Read Bible
Posted by Becky at 10:49 AM

This sounds like a very interesting, thought provoking and quotable book!