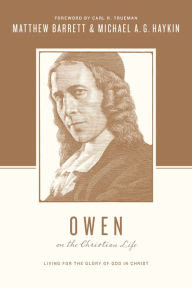 I'll admit it from the start--or almost the start as the case may be. John Owen intimidates me. I'm scared to pick up any of his books. I know that John Owen is a BIG theologian that I should be familiar with, or, more familiar with at any rate. But. He doesn't seem like he would be accessible and enjoyable.

For the record, since you might not have read other reviews I've written, I DO enjoy reading theology, actively enjoy it. Not as a duty or an obligation. But for the joyful challenge of it. I've discovered a few things. One, you can't judge an author's accessibility by the century in which they're writing. Two, you can't judge an author by just one work. For example, I found one or two of Jonathan Edwards' books to be really difficult, but, when I picked up a collection of his sermons, I was amazed by how accessible they were. Three, some authors are difficult to read, but, prove ultimately worth the effort in the end because of how much you do, in fact, learn.

I chose to read Owen on the Christian Life because I wanted someone to persuade me to read John Owen's actual works. Were the authors successful in persuading me? Yes and no. Yes, I do plan on reading John Owen eventually. By reading the book, I'm convinced now that he would be worth reading, worth the effort in the end. But no, I'm not in a rush to do so! I'm still a bit scared! If I do decide to pick up John Owen, I'll refer back to their guide to reading Owen today. The first book they suggest readers pick up is Of the Mortification of Sin in Believers.

In the first chapter, the authors provide a biographical sketch of John Owen. Eight chapters focus on his theology. These chapters are "Living by the Scriptures," "Communing with the Trinity," "Beholding the Glory of Christ," "Crushed for Our Iniquities," "Salvation Belongs to the Lord," "Justification by Faith Alone and Christian Assurance," "The Indwelling Spirit, The Mortification of Sin, and the Power of Prayer," and "Living the Christian Life as the Church under the State." The final chapter focuses on the legacy of John Owen. The book also includes Owen's The Lesser Catechism, which I found fascinating.

I had several favorite chapters. "Crushed For Our Iniquities" and "Salvation Belongs to the Lord" were GREAT chapters and a real treat for me.

The book grounds Owen's theology IN the times in which he lived. That is the authors provide thorough background and context for Owen's theological views and works. Often this means explaining who his opponents were, discussing his opponents' views, and how Owen's views differed--the ways in which they differed. Overall, I think this was helpful. But it also means that it is difficult to casually read.