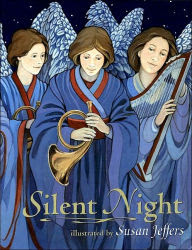 This one is a picture book adaptation of the Christmas carol--or hymn--"Silent Night." Included are the traditional first and second verses. Also included is the less familiar verse about the wise men. The verse about the wise men is not traditionally included in lyrics for the song. So it isn't even a traditional fourth verse! And versions of the song with more than three verses, don't have this verse either. I saw one adaptation with six verses--none of them about wise men!

I haven't decided if the lack of the third verse is enough of an annoyance to keep me from liking this one. The edition I have is from 1984. It was reprinted in 2003, but, I'm not sure if any changes were made to the book.

© Becky Laney of Operation Actually Read Bible
Posted by Becky at 9:52 AM