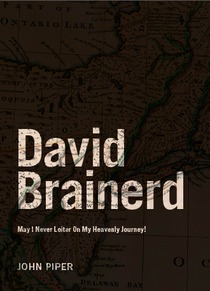 First sentence: David Brainerd was born on April 20, 1718 in Haddam, Connecticut. That year John Wesley and Jonathan Edwards turned 14. Benjamin Franklin turned 12 and George Whitefield 3. The Great Awakening was just over the horizon and Brainerd would live through both waves of it in the mid thirties and early forties, then die of tuberculosis in Jonathan Edwards’ house at the age of 29 on October 9, 1747.

Premise/plot: A short biography of David Brainerd written by John Piper. The first half is the biography itself. The facts of his life, the times in which he lived, what he did, etc. The second half examines WHY David Brainerd is and was influential. In other words, why our lives might be better for having come into contact with David Brainerd's diary or journal.

Who was David Brainerd? A man who felt God's calling to be a preacher. But having been expelled from Yale, he found himself with a strong calling and no outlet. He then is led to become a missionary to the Indians. His lifework--as such--was not his plan "A" or probably even his plan "B." He was a sick, weak man--literally a dying man--the last five to seven years of his (short) life. But he was a man who felt the importance of redeeming the time, and, not wasting one's suffering.

He continues, "It was a short life: twenty-nine years, five months and nineteen days. Only eight of those years as a believer, and only four of those as a missionary. Why has Brainerd’s life made the impact that it has? One obvious reason is that Jonathan Edwards took the Diaries and published them as a Life of Brainerd in 1749. But why has this book never been out of print?"

Piper doesn't seek to answer this question for everyone. But he does answer it all the same.


The answer for me is that Brainerd’s life is a vivid, powerful testimony to the truth that God can and does use weak, sick, discouraged, beat-down, lonely, struggling saints, who cry to him day and night, to accomplish amazing things for his glory.

My thoughts: Brainerd's life teaches that one can't always know or predict what one's legacy will be or might be. God can use pain, suffering, weakness, hardships and strains--both physical and emotional--to bring glory to his name and accomplish his will. One doesn't have to be a success in the world's eyes and according to the reckoning of others--to be used mightily by God.

Piper admired Brainerd because despite his circumstances--he clung mightily to God and was dependent on Him to sustain him. Brainerd was often sick, often in great pain, often depressed and discouraged, often lonely, often unable to see the 'bright side' of life, and, yet he spent his time seeking God and obeying Him.

Reading this short biography made me want to read David Brainerd's Diary for myself.