Book Review: Stone for a Pillow 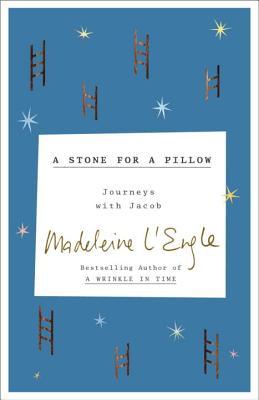 First sentence: In the late afternoon, when the long December night had already darkened the skies, we opened Christmas cards, taking turns, reading the messages, enjoying this once-a-year being in touch with far-flung friends. There, incongruously lying among the Christmas greetings, was an official-looking envelope addressed to me, with Clerk of Court, New York County, in the upper left-hand corner. A call to jury duty. Manhattan does not give its prospective jurors much notice. My call was for the first week in January. To the notice inside had been added the words, Must Serve.

Premise/plot: Stone for a Pillow is the second in the Genesis trilogy. The best way to describe the book is that it's reflective "theology" written in a stream of consciousness style. It is loosely-inspired by the middle of the book of Genesis--the chapters focusing on Jacob and Esau.

My thoughts: In my review of And It Was Good, I wrote that L'Engle's theology was dangerous. I would definitely say that is still the case. If anything, the years between 1983 and 1986 led L'Engle even further from the Christian path. The more I read, I more I realize that it's just not a misconception or misunderstanding on my part, but, that she did indeed believe some mighty strange, actually heretical things.

For example, this is L'Engle's writing on the topic of the atonement. She rejects the doctrine out and out.


In a vain attempt to make people see God as an avenging judge, theologians have even altered the meaning of words. Atonement, for instance. A bad word, if taken forensically. In forensic terms, the atonement means that Jesus had to die for us in order to atone for all our awful sins, so that God could forgive us. In forensic terms, it means that God cannot forgive us unless Jesus is crucified and by this sacrifice atones for all our wrongdoing. But that is not what the word means! I went to an etymological dictionary and looked it up. It means exactly what it says, at-one-ment. I double-checked it in a second dictionary. There is nothing about crime and punishment in the makeup of that word. It simply means to be at one with God. Jesus on the cross was so at-one with God that death died there on Golgotha, and was followed by the glorious celebration of the Resurrection… Sin, then, is discourtesy pushed to an extreme, and discourtesy is lack of at-one-ment.


We are all going to face God’s judgment, but we will not receive forensic judgment from the throne of heaven. God is not going to abandon Creation, nor the people up for trial in criminal court, nor the Shiites nor the communists nor the warmongers, nor the greedy and corrupt people in high places, nor the dope pushers, nor you, nor me. Bitter tears of repentance may be shed before we can join the celebration, but it won’t be complete until we are all there. This is the God of Scripture, the God of forbearance, forgiveness, and unqualified love. We have been living in a world where we have viewed God and each other in a forensic way for too long, and it should be apparent that it is not working, and that it is not going to work. This forensic world is not a scriptural world, but a clever projection of the Tempter. Our only hope for peace, within our own hearts, and all over our small green earth, is for us to open ourselves to the judgment of God, that judgment that makes the waters and the hills to sing. For God’s judgment is atonement, at-one-ment, making us one with the Lord of love.

Is she a univeralist? You be the judge:


All will be redeemed in God’s fullness of time, all, not just the small portion of the population who have been given the grace to know and accept Christ. All the strayed and stolen sheep. All the little lost ones.

If God created all of Creation, if God is the author of Buddhists and Hindus and Jains as well as those who have “accepted Jesus Christ as Lord,” how can we avoid a wishy-washy permissiveness? Not by retreating back into a closed system. Not by saying: Only those who believe exactly as I do can be saved. Not by insisting that only those whose god fits into the same box as my god will go to heaven. Not by returning to polytheism and proclaiming that our god is greater than the gods of other cultures. Paradoxically, it comes back to us, to our acceptance of ourselves as created by God, and loved by God, no matter how far we have fallen from God’s image in us. It is not a self-satisfied, self-indulgent acceptance, but a humble, holy, and wondrous one.

I don’t understand why the idea of emptying hell upsets some people so. To be upset about it is to think forensically, and while we all suffer from a touch of this, we can surely recognize our own lack of generosity.

When we set ourselves up as being the only people in Creation who have the truth and who will inherit the kingdom, we are worshipping the little god of our own pride.

She is more influenced by the theory of the butterfly effect than the words of Christ--or the Word of God. Here are a few of her statements about the Bible.


It is a living book, not a dead one. It urges us to go beyond its pages, not to stop with what we have read. It is a book not only of history, and of the prohibitions of the commandments and laws, but of poetry and song, of fantasy and paradox and mystery and contradiction. It is not the only book in which I will look for and find truth.

The Bible is a book which urges us to keep our concept of God open, to let our understanding grow and develop as we are illumined by new discoveries. If we stopped where Scripture leaves us, in the New Testament as well as the Old, we could still, with clear consciences, keep slaves.

What a passage says to us today may not be what the same passage will say when we next encounter it. We must strive to be open to the deeply mythic quality, expressing the longings and aspirations and searchings of the human race.

Once I remarked that I read the Bible in much the same way that I read fairy tales, and received a shocked response. But fairy tales are not superficial stories. They spring from the depths of the human being. The world of the fairy tale is to some degree the world of the psyche. Like the heroes and heroines of fairy tales, we all start on our journey, our quest, sent out on it at our baptisms. We are, all of us, male and female, the younger brother, who succeeds in the quest because, unlike the elder brother, he knows he needs help; he cannot do it because he is strong and powerful. We are all, like it or not, the elder brother, arrogant and proud. We are all, male and female, the true princess who feels the pea of injustice under all those mattresses of indifference. And we all have to come to terms with the happy ending, and this may be the most difficult part of all. Never confuse fairy tale with untruth. Alas, Lucifer, how plausible you can be, confusing us into thinking that to speak of the Bible as myth is blasphemy.

Though she ridicules people who make God into their own image instead of looking for the image of God within them. She seems to have no problem defining God herself throughout the book. She doesn't use the revealed Word of God as a primary source--but herself, her instincts, her insights, her biases.


I shudder at the once widely-accepted theory that God preordained us all before we were born for either heaven or hell, and nothing we did would change this predestination. What kind of god would predetermine part of his creation to eternal damnation? This is surely not consistent with God’s creation in the early chapters of Genesis, when Elohim looked at all that had been made and called it good, very good. And yet this brutal theology used to be widely accepted and taught, a kind of spiritual terrorism.

That being said, there were still some good statements--sentences. (Even a stopped clock is right twice a day. But a ticking-working clock set to the wrong time, is never going to be right.)


It is not a simple thing to accept God’s love, because if we do, we must return love.

Fiction draws us into participating in other lives, other countries, other ways of life or thinking.

It was a sad moment when I had to admit to myself that I was not going to be able to read, in this lifetime, all the books I need to read!

If we refuse to take the risk of being vulnerable we are already half-dead. If we are half-dead we don’t have to starve with the people of Ethiopia. We don’t have to share the terrible living conditions of old people struggling to exist on dwindling social security payments in our overcrowded, hostile cities. We don’t have to smell the stench of filth, and disease, and hunger in the favelas and barrios.


© Becky Laney of Operation Actually Read Bible
Posted by Becky at 10:28 AM